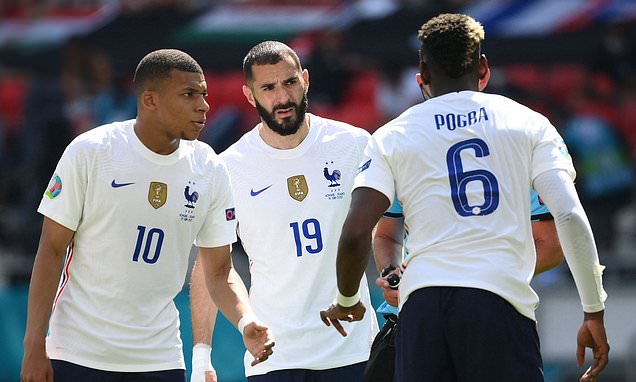 Portugal vs France LIVE: Follow the heavyweight clash from Budapest as both the reigning world and European champions aim to book their Euro 2020 last-16 place

A thrilling Group F finale lies in wait as France take on Portugal at the Puskas Arena in Budapest as both chase qualification for the last-16.

France will progress if they win or if they draw and Germany fail to beat Hungary in the other game.

Portugal qualify also with a win, or if they draw and Germany lose.

Join Sportsmail’s SAM MCEVOY for all the build-up, team news, live updates and full-time result from the match.

France are already through with four points from their two games so far in Group F but Germany, Portugal and Hungary are all still in with a shout of progressing to the last-16.

England await the team who finishes second so there is plenty of interest elsewhere in a group that has provided plenty of excitement so far.

Sportsmail has had a look at what has happened, how each team can progress, some stars of the show so far and picks who we think will go through.

Two of the last-16 ties have been confirmed and we know a further four teams have already qualified. A reminder there will be four teams that finish third in their group to make it through.

France have qualified for the knockout stages and are currently top the group, not by much, but can finish as group winners tonight, while Germany, Portugal and Hungary all tussle for a spot in the last 16.

Hungary only have a point, while Germany and Portugal have three, leaving fans with a headache on what results are needed where to qualify (more on that later).

A reminder that your two 8pm kick-offs are:

But as it stands, this is how the table looks…

But before it is dead and buried, there’s still plenty to be decided from Group F.

The group stage does end tonight but what a thrilling climax we have in store – in this live blog, we will be covering all the minute-by-minute action in arguably the biggest tie of the week: Portugal vs France.

Meanwhile, Hungary will be hoping to make the unlikeliest of escapes if they can manage a win against Germany in Sportsmail’s other live blog, which you can follow here.

Expect plenty more twists and turns in a group that has certainly lived up to its billing.