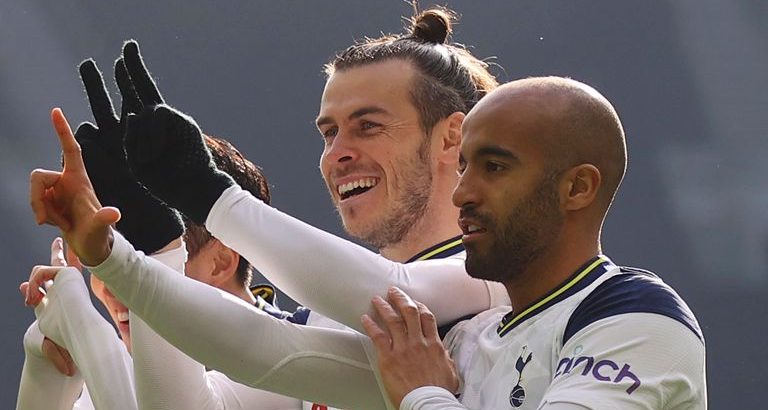 Was Jose Mourinho right all along about Gareth Bale? The Welshman’s performance against Burnley assessed, plus another morale-boosting Arsenal win dissected…

“I am very happy for him, very happy for the team because the team needs his talent,” Jose Mourinho told Sky Sports after Gareth Bale inspired Tottenham to an emphatic 4-0 win over Burnley.

Any side would want that sort of talent, especially the form Bale showed against Sean Dyche’s side.

Questions have been asked of Mourinho ever since Bale returned to north London as the Spurs boss used him infrequently as he looked to regain his form, and more importantly his fitness.

And his struggle for fitness has always been the frustration for Mourinho.

During Spurs’ difficult run, he had to fend off speculation about Bale’s role at Spurs as the Welshman continued to sit on the bench as the north London club struggled to pick up results. 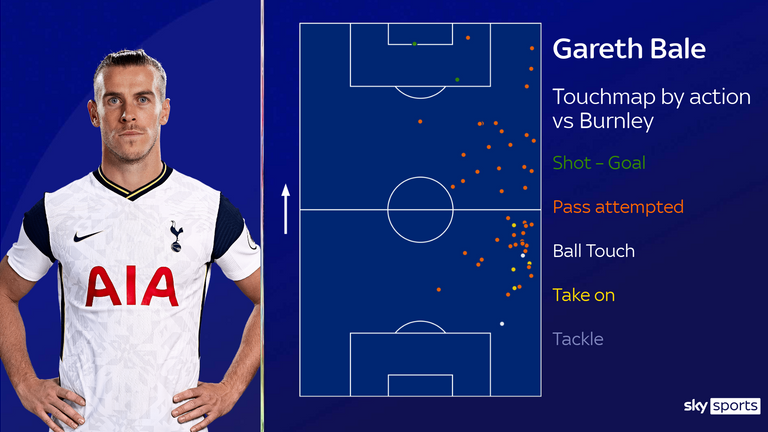 He never questioned Bale’s quality, but he did question his fitness as Spurs, and Mourinho, played the waiting game. Finally, it looks to have paid off.

The Wales international looks to be regaining his form, his confidence and he looks the fittest he’s done all season. He also looks happy following some well-documented difficulties in Madrid. 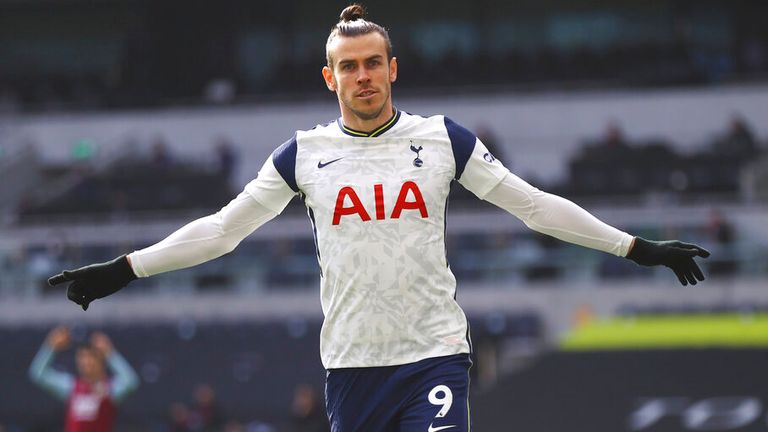 It’s also translating to the pitch as Bale has been directly involved in seven goals in his last four appearances for Tottenham in all competitions (four goals and three assists). It was also the first time he has scored twice in a match since September 2019 and he has now scored in successive club appearances for the first time since for Real Madrid (v Getafe, Girona and Leganes) in August and September 2018.

Mourinho’s stance, and patience, with Bale has been justified and he will be hoping this form continues as Spurs look to push up the league before the end of the season.
Oliver Yew

Chelsea in need of a clinical finisher

Thomas Tuchel’s unbeaten run as Chelsea boss has now extended to nine games – but after they missed the chance to climb into the top four with a 0-0 draw at home to Manchester United, it seems he is clear on what his side needs to get to the next level: a star striker.

For all the control and defensive solidity Chelsea have shown at the start of his reign, they have rarely looked ready to cut loose and make their dominance count in matches. They’ve scored 10 goals in his nine games and finishing was on Tuchel’s mind after the tight game on Sunday.

“You don’t get many chances, if you do a half-chance must be enough,” he said. “We’re not in that moment where we are clinical enough to win games like this.”

It was a problem that damaged Frank Lampard during his tenure and one Tuchel will have to resolve.

Does the answer lay within the club? The hope is Tuchel will get Timo Werner firing but he began on the bench against United and is yet to ignite under his new boss. Olivier Giroud, despite his knack of scoring big goals, isn’t the long-term solution, while Tammy Abraham seems out of favour after not even making the squad this weekend.

Tuchel hinted in the week at Kai Havertz’s potential as a false nine but there is likely to be demand from Chelsea supporters for a big-name addition in the summer if the problem persists.

Tuchel was treated to a forward line of Neymar and Kylian Mbappe at Paris St-Germain. Those superstars may be out of reach but a high-quality goalscorer is a must if Chelsea are to become serious contenders in the Premier League next season.
Peter Smith 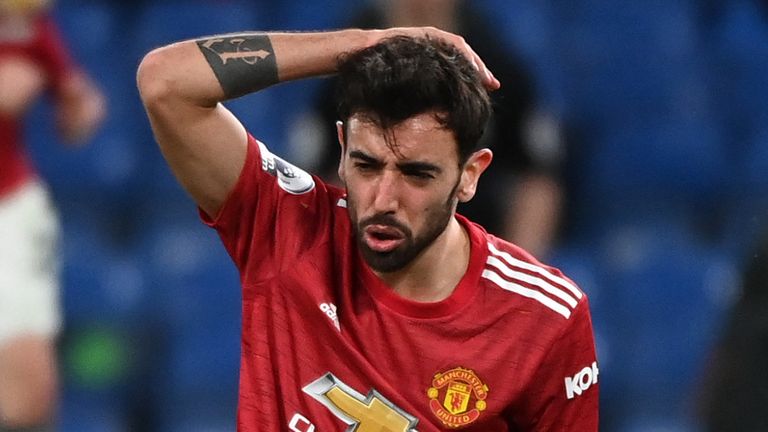 “Leave him out, give him a rest!” When Thomas Tuchel was asked about Bruno Fernandes ahead of kick-off, his light-hearted response underlined the quality and respect the brilliant Manchester United midfielder has. There’s no denying that and his status as player of the year favourite reflects the extraordinary impact he’s had at Old Trafford.

But their star man wasn’t at his best at Stamford Bridge – and it isn’t the first time Fernandes has failed to live up to the billing in a big contest.

Of course, playing against the top teams is a harder challenge – but the drop-off at times feels more than it should be and, besides, United could do with some of his magic to get over the line in these tight contests. They’ve drawn five of their seven matches against ‘big six’ sides this season 0-0.

His performance against Chelsea was underwhelming. “Fernandes’ final pass today hasn’t been great,” said Sky Sports pundit Gary Neville, as the playmaker laboured to a 71.4% passing accuracy, the second-lowest figure among his team-mates.

Fernandes lost the ball 20 times in all – more than any player on the pitch – and while risky passing is part of his remit, there were examples, such as the pass out of play when he tried to set up a counter-attack through Marcus Rashford, when he had the capacity to do better.

While he weighed in defensively with three tackles and two interceptions, it is in the final third United really need Fernandes to shine – and a couple of blocked shots and one chance created was a poor return. Ole Gunnar Solskjaer will certainly need more from him next Sunday in the Manchester derby.
Peter Smith

Two comebacks in four days have transformed the mood at Arsenal. Imagine if it had gone the other way, that they’d been knocked out of the Europa League and then beaten by Leicester? The pressure would have heaped on Mikel Arteta, with Arsenal’s season effectively over.

Instead, they’re alive and kicking, with Pierre-Emerick Aubameyang’s late winner keeping their European campaign going and an impressive response to going a goal down at Leicester allowing them to look up the Premier League table.

After a trip to Burnley next weekend, consecutive league fixtures against Tottenham, West Ham and Liverpool look key in determining whether the Gunners can beat the odds and close the gap on the top four. But they now at least look confident heading into that domestic challenge and their Europa League tie with Olympiakos.

The performances of Willian, Nicolas Pepe, and Martin Odegaard will also lift the Arsenal supporters for this key period. Willian repaid Arteta’s faith in him by setting up two of the goals, while Pepe, who tapped in the third, produced one of his best performances in an Arsenal shirt.

Odegaard, who came on for the injured Smith Rowe, will now need to take on the responsibility at No 10 if the Englishman is out but showed off his quick feet in the build-up to Pepe’s strike and is looking more assured and accomplished in this side.

Arsenal still have plenty of issues to address – they were all over the place for Leicester’s opener and were wasteful with possession in the final third during much of the first half – but with confidence-boosting results behind them, they can attack these defining fixtures coming up with belief.
Peter Smith

Now it’s all about Thursday for Liverpool

So Liverpool are back to winning ways, but it will take far more than a win at Championship-bound Sheffield United to convince that they are also back on track.

Liverpool’s week will not be decided by its beginning – a comfortable 2-0 victory at the league’s worst team – or its end – a home date with third-from-bottom Fulham – but it’s middle engagement: Chelsea on Thursday night at Anfield.

Win that match, and Liverpool will be very much back in contention for a top-four berth. And if the performance matches a positive result, then it may well be time to talk about Jurgen Klopp’s side being back on track, given Sunday’s earlier demonstration that Thomas Tuchel’s side are not a soft touch.

Sunday night’s victory has given the champions a platform to lift off again from but there’s no guarantee it will propel them far. Firmino’s scratchiness in front of goal was evident again. Kabak had several awkward moments and a defensive spine of Kabak, Phillips and Adrian will be an obvious area of vulnerability for Chelsea to exploit this midweek.

“The big concern for Liverpool were the signs tonight that if Sheffield United had a bit more quality…” mused Roy Keane. “They got in behind, the centre-halves got bullied a couple of times, and Sheffield United should have scored once or twice. Against a better team, Liverpool will be punished for that.”

Compared to recent weeks, Liverpool were better at Sheffield United. But they will need to be better again on Thursday for it to count for anything.
Pete Gill

Will injury-hit Leicester avoid another drop-off?

Leicester were hoping to move up to second in the Premier League table on Sunday. They’re up to second – but in the injury standings instead. Harvey Barnes and Jonny Evans have joined a worrying number of their colleagues in the treatment room and defeat to Arsenal leaves the third-placed Foxes nervously looking over their shoulder.

That may seem premature and dramatic for a team that has lost just twice in their last 13 league games but without key figures across the park and amid the context of last season’s drop-off, which saw Brendan Rodgers’ side slide out of contention for a Champions League qualifying place, there will be worry in and around the Leicester camp.

Youri Tielemans gave Leicester an early lead against Arsenal but they were otherwise disjointed in their attacking play and badly missed the creativity of James Maddison to build up the pitch. With Jamie Vardy looking in pain for long periods and Barnes suffering a knee problem, their attacking options could take a further hit.

At the back, Luke Thomas – in for James Justin – struggled against Nicolas Pepe, while Daniel Amartey’s deployment at centre-back after Jonny Evans went off was a reminder of the strain they’re now feeling in that department, with Wesley Fofana and Wes Morgan absent.

With Dennis Praet and Ayoze Perez also out, that’s eight important figures Leicester are currently missing and there are signs the available players – who were also knocked out of the Europa League on Thursday – are feeling the strain.

Given their depleted resources, the back-to-back Premier League games against Burnley, Brighton, and Sheffield United is a kind run of fixtures. But anything other than maximum points in those games will have critics pointing to their ominous run-in to the season: Man Utd, away. Chelsea, away. Tottenham, home.
Peter Smith

A point gained, or two lost for Fulham?

Fulham extended their impressive recent unbeaten Premier League run to five games with a goalless draw at Crystal Palace on Sunday lunchtime, but will it be a point gained, or two dropped come the end of the season?

The draw did move the Cottagers to within just three points of both Newcastle and Brighton, meaning Scott Parker’s side are now unbeaten in their last seven league matches games on the road – their longest such run without defeat away from home in the competition.

However, you could see from Parker’s body language after the game that he felt it was two points dropped in Fulham’s bid to beat the drop, especially given their second-half domination at Selhurst Park.

In fact, the visitors had 16 shots in the contest – 14 of which came in the second half – the most they’ve ever had in the final 45 minutes of a Premier League away clash since 2003-04 without managing to score.

And Parker will definitely need his strikers to find their scoring touch between now and the end of the season if the west Londoners are to pull off the great escape.
Richard Morgan