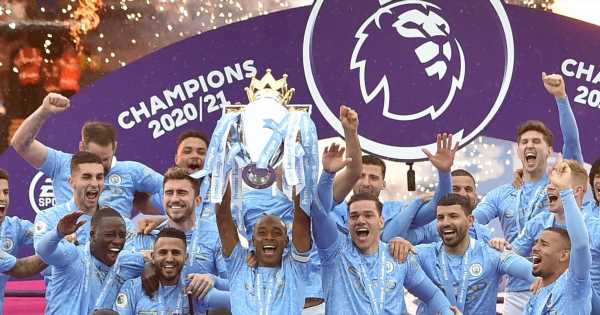 A supercomputer has predicted Manchester United will drop to fourth spot in the Premier League this season.

And to add insult to injury, neighbours Manchester City are tipped to comfortably take the crown once again.

Pep Guardiola’s dominant side have won England’s top flight in three of the past four seasons.

Another could be on the cards, as SportingIndex’s supercomputer has suggested City will clinch the title next May with an 11-point margin to second.

Jurgen Klopp’s 2020 champions Liverpool, who suffered last season with major injury troubles as they came third, are poised to bounce back and come second.

But the big gap between the pair shows there is work to be done in pre-season for the Reds, who are currently hard at work in Austria.

Their defence was stretched to the limit last season, but Klopp will now have Virgil van Dijk, Joe Gomez, Joel Matip and new signing Ibrahima Konate to choose from at centre-half.

As things stand, the supercomputer expects Chelsea to be pipped to second spot, with Thomas Tuchel’s European champions listed in third.

What's your prediction for the top four this season? Let us know in the comments section.

Should Chelsea sign Erling Haaland from Borussia Dortmund, they could well provide City with a serious challenge for the title.

United are then supposedly set to be the final team to qualify for Champions League football, finishing in fourth with 74 points.

Just outside the top four is where the Premier League’s north London duo are tipped to reside.

The Gunners’, though, would supposedly finish way off Champions League qualification with 62 points – leaving them 12 points short of United’s total.

On the bright side for Arsenal fans, Nuno Espirito Santo’s Tottenham would finish two points behind them in sixth.

The Foxes are tipped for seventh, while Rafa Benitez’s Everton, Marcelo Bielsa’s Leeds and David Moyes’ West Ham make up the top half in eighth, ninth and 10th respectively.

Aston Villa, meanwhile, are predicted to finish 11th again but with five less points with a total of 50.

Between 12th and 17th, the supercomputer expects Brighton, Wolves, Southampton, Newcastle, Burnley and Norwich to come in that order.

That means poised for the drop into the Championship come 2022 are Patrick Vieira’s Crystal Palace, as well as newly-promoted duo Brentford and Watford.

Palace in 18th are tipped to pick up just 36 points, suggesting that could be the figure clubs in the bottom need to aim for as a minimum to survive.