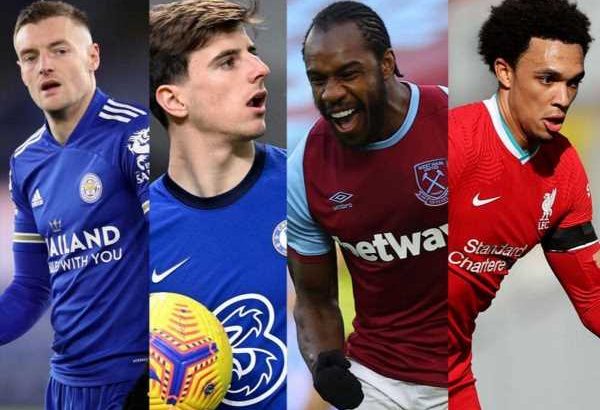 The Premier League may not have much of a title race to speak of this season but the battle to finish in the top four and earn a place in next year’s Champions League is still just about alive.

Chelsea and Leicester City currently occupy third and fourth place and look relatively comfortable but they face busy, difficult run-ins, with FA Cup and Champions League finals to prepare for.

The other contenders – West Ham and Liverpool – have no such problems and can focus solely on the task at hand, but have ground to make up if they are to mount a late push.

With only a handful of games left, The Independent has broken down the run-ins, checking the average home and away points-per-game and average expected goal difference (xGD) of their remaining opponents.

Fears of another late season collapse were spreading through the east Midlands after the stunning 4-2 defeat to Newcastle but Leicester have taken a huge step towards Champions League football.

Caglar Soyuncu’s match-winning header against a much-changed Manchester United breathed new life into the Foxes’ push for a top-four finish, though there is still work to do once Saturday’s FA Cup final is out of the way.

Leicester follow a Wembley date with Chelsea by facing them at Stamford Bridge, then Tottenham visit the King Power. The eight-point cushion over fifth is a lead that even they will struggle to let slip, though.

This time last week, Chelsea had to juggle the toughest league run-in with FA Cup and Champions League finals. Then, a win away at Manchester City appeared to put them on a clear path towards a top-four finish.

A surprise defeat to Arsenal at Stamford Bridge has shaken things up somewhat, though, and Thomas Tuchel’s side are suddenly looking over their shoulder again.

Leicester’s visit to west London next week, after the FA Cup final, is almost a must-win. Anything less than three points will make for an uncomfortable final day away at Villa Park.

Liverpool are the ones to watch. Even though they have repeatedly passed up opportunities to gain ground on their rivals, the win at Old Trafford was a huge result, making a late run into the top four possible.

One of Leicester or Chelsea will drop points when they meet at Stamford Bridge and the run-in is very kind to Jurgen Klopp’s side. Like West Ham, all three of their other opponents are in the bottom half of the table and have nothing to play for.

Still, they cannot afford any slip ups like the recent late draws against Leeds and Newcastle. They may need to be perfect, and could lose out on goals scored if results go the wrong way, but they have a chance.

Sunday’s defeat to Everton was the latest setback in West Ham’s unlikely push for a top four place. David Moyes has refused to throw the towel in but admitted in his post-match interviews that their 1-0 reverse could be “costly”.

Fortunately, West Ham’s run-in is relatively kind and the easiest on paper according to home and away points-per-game. All three of their remaining opponents are in the bottom half and Moyes’ men have been reliable against teams at that end of the table.

What’s more, none of three have anything to play for. Brighton and Southampton are safe, while West Bromwich’s relegation was confirmed at the weekend. Nine points from nine would give West Ham a chance.

It has taken longer than many expected but Tottenham finally look like they can be counted out of the race. Defeat at Leeds on Saturday effectively consigned Spurs to a second straight season without Champions League football.

With three games left, the maxiumum number of points that Ryan Mason’s side can take is 64, with fourth-place Leicester only one point off reaching that total. Mason had done well to keep hopes alive for this long by winning his first two league games in charge.

A Europa League place is by no means out of the question but a spot in next season’s inaugural Conference League looks more likely, particularly as their run-in from here is made up of three capable sides in Wolves, Aston Villa and Leicester.

What if Chelsea finish outside the top four but win the Champions League?

The Premier League can send a maximum of five teams to the Champions League.

The fourth-place finishers would only have missed out on qualification if Chelsea had won the Champions League while finishing outside the top four and Arsenal had also won the Europa League.

Arsenal’s semi-final elimination at the hands of Villarreal means the teams who finish in the top four will all qualify for the Champions League.