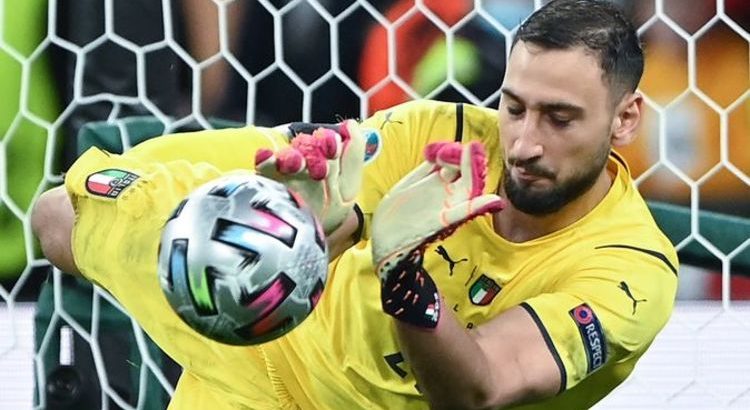 Paris Saint-Germain are reportedly set to announce the signing of Euro 2020 Player of the Tournament Gianluigi Donnarumma this week.

Donnarumma was part of the Italy side who defeated England on penalties in Sunday’s final at Wembley Stadium.

The 22-year-old saved two spot-kicks in the shootout to earn the Italians their first major trophy since lifting the World Cup in 2006.

Jadon Sancho and Bukayo Saka had their attempts prevented while Marcus Rashford struck the post on a devastating night for the Three Lions.

Luke Shaw handed England hope in their maiden major final since 1966 by scoring inside two minutes.

However, Leonardo Bonucci equalised in the second half and the hosts just about held on for a penalty shootout.

Donnarumma was excellent during the tournament but is bizarrely without a club having run down his contract at AC Milan, for whom he made his debut aged 15.

He has been strongly linked with a move to PSG and the move is set to be formally finalised now that the Euros is over, journalist Fabrizio Romano has claimed.

Donnarumma would likely be first choice but there have also been rumours of a loan move, including back to Milan.

The shot-stopper made 251 appearances for the Serie A side after breaking into their first team in October 2015.

PSG have now moved for Donnarumma and he is set to join several new players at the French club as boss Mauricio Pochettino plans a vastly improved campaign.

Pochettino’s side were surprisingly beaten to the Ligue 1 title by Lille last term and they were beaten by Manchester City in the Champions League semi-final.

They have already added midfielder Gini Wijnaldum on a free transfer after the Dutchman left Liverpool at the end of his contract.

Right-back Achraf Hakimi has also arrived in the French capital having signed from Borussia Dortmund.

Pochettino was linked with a shock departure to former club Tottenham during the Premier League side’s chaotic search for Jose Mourinho’s replacement.

Spurs ended up appointing Nuno Espirito Santo after coming close to deals for each of Antonio Conte, Paulo Fonseca and Gennaro Gattuso.

However, the goalkeeper has claimed that VAR’s scrutiny of a goalkeeper’s movement on their goal-line meant that he did not realise that his side had actually won.

“I didn’t celebrate on the penalty because I didn’t realise we had won,” Donnarumma told Sky Italia.

“I was already down after Jorginho’s missed penalty and I thought we had lost, but instead I had to continue.

“Now, with VAR, they always look at your feet because you can’t be in front of the line, so I turned to the referee to see if everything was okay.

“Then I saw my team-mates coming towards me and everything started from there. I didn’t understand anything!”
Source: Read Full Article