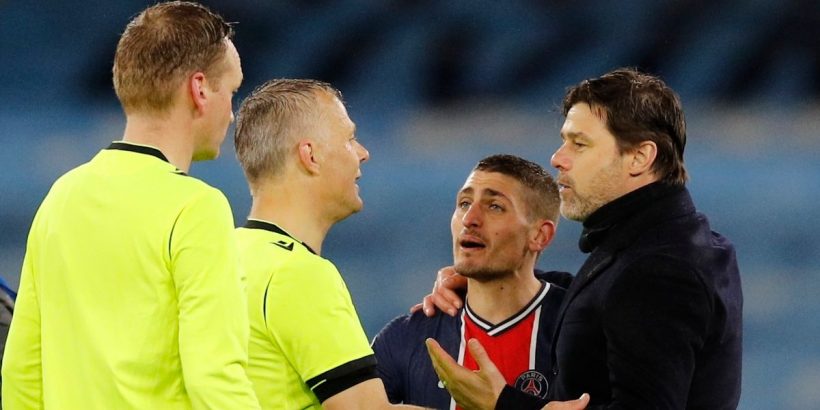 PSG stars Marco Veratti and Ander Herrera have accused referee Bjorn Kuipers of swearing at them during their loss to Manchester City on Tuesday night.

The Ligue 1 giants were sent crashing out of the Champions League by City in a 2-0 defeat on the night, leaving the score at 4-1 on aggregate.

Tensions ran very high at the Etihad Stadium, leading to Angel di Maria getting sent off and a number of yellow cards for the PSG players.

As it seemed more and more clear that City would be progressing through, the visiting players grew increasingly frustrated, with scuffles breaking out and the referee having to intervene.

However, according to claims from midfield duo Veratti and Herrera, referee Kuipers also grew angry with the several protests from PSG players throughout the match.

And Italian international Veratti claimed that he was told “f*** you” on two occasions.

"We are told about respect, about respect with the referees. He said ‘f*** off ' to Paredes.," Herrera told RMC Sport.

“If we say that, of course we get four matches (banned).”

City hero Riyad Mahrez, who scored both of their goals on the night to add to his strike in the first leg, claimed that PSG began “kicking” them when the tie was out of reach.

"They lost their nerves and then they started kicking us, they had a red card and then it was more comfortable for us."

City will face either Chelsea or Real Madrid in the final of the Champions League later this month.