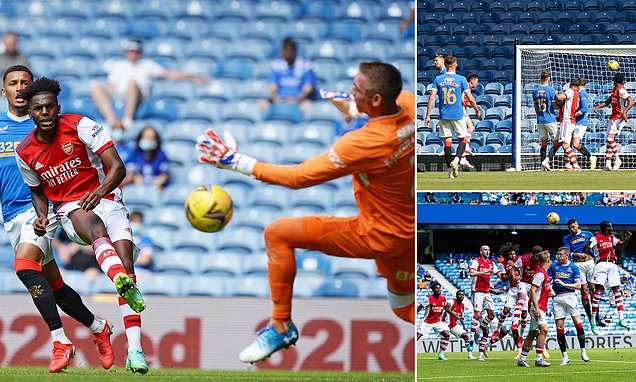 Arsenal twice came from behind as they continued their pre-season preparations with an entertaining 2-2 draw against Scottish Champions Rangers at Ibrox.

Summer signing Nuno Tavares fired home on his debut to cancel out Leon Balogun’s header in the first half, before Cedric Itten put the home side back in front with another set-piece finish, meaning Eddie Nketiah had to be on hand to salvage a draw.

The Gunners were eager to bounce back after a disastrous pre-season opener in midweek in a 2-1 defeat at Hibernian, and Mikel Arteta will be pleased with what he saw in this run-out after spending much of the game as the better team. 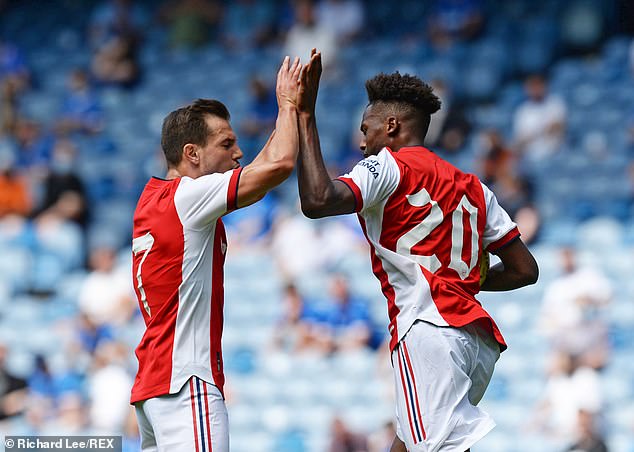 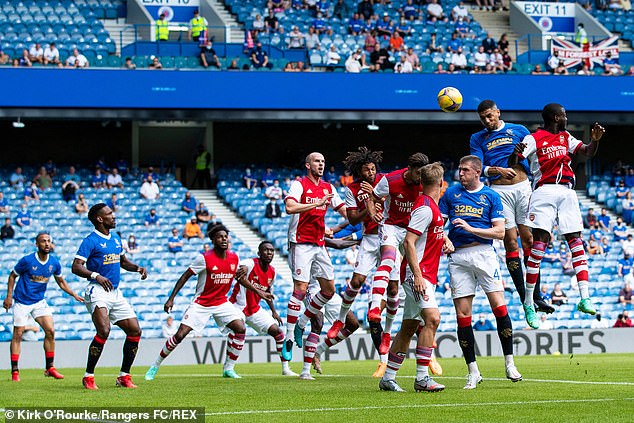 In a relatively fast-paced opening for a pre-season friendly, the home side began on the front foot, giving the 2,000 returning ‘Gers fans plenty to shout about early on.

They got their reward within 15 minutes as Leon Balogun jumped highest to head home a delightful corner from James Tavernier as the Gunners’ pre-season woes looked to be continuing.

But Arsenal reacted well to going a goal down and spent much the remaining half on top and were behind for only nine minutes thanks to some great work from new boy Tavares.

The left-back dispossessed Tavernier in the Rangers before cutting inside and firing a fine finish past McGregor with his right foot. 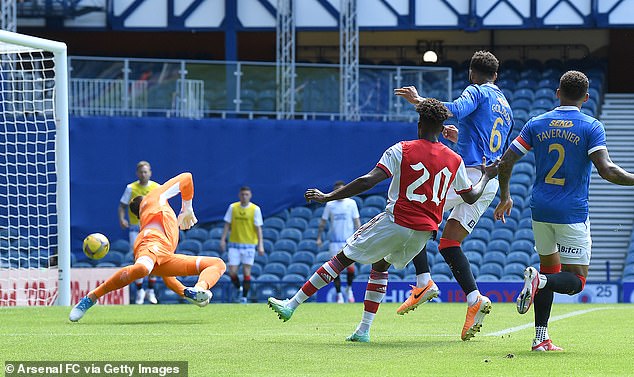 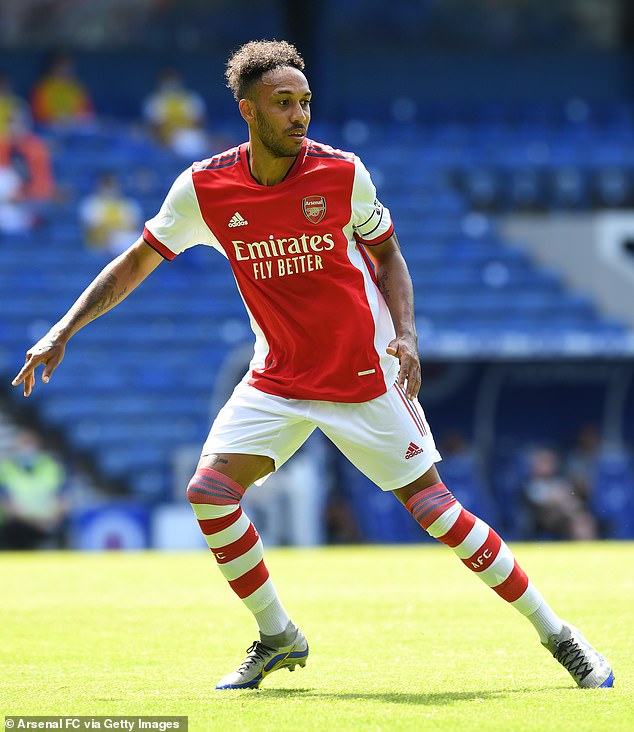 The Gunners probably felt they should have gone into the break in front, with Pierre-Emerick Aubameyang perhaps picking up a hat-trick after a host of excellent chances on a frustrating afternoon for the skipper.

The intensity of the game continued in the second half despite a raft of substitutions from both sides, with Arsenal once again dominant but struggling to force goalkeeper Allan McGregor into enough action.

The introduction of Alexandre Lacazette saw him immediately tee up the bright Emile Smith Rowe, who’s curling effort had to be tipped just past the post by the veteran Scot. 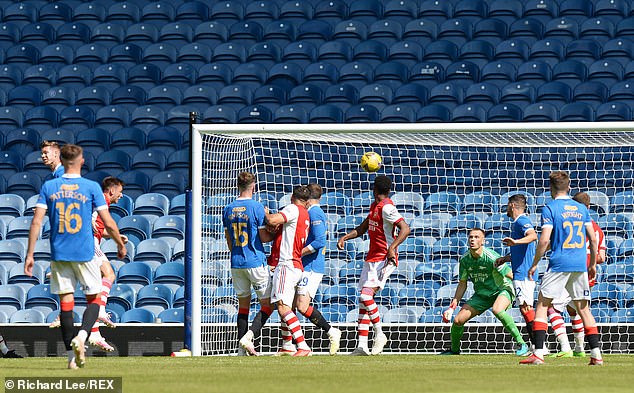 But it was set-pieces that threatened to be Arsenal’s undoing again as John Lundstram went close with a free header before substitute Itten headed Rangers back in front with 15 minutes to play.

With it looking as though Arsenal were about to suffer their second successive 2-1 reverse in Scotland, Nketiah burst into the box before composing himself and firing a left-footed strike through McGregor’s legs.

The Arsenal pressure continued as they pushed for the victory but were unable to convert a host of chances with Hector Bellerin and Willian the notable culpritsas the game ended all-square.

Relive all the action as it happened BELOW:

That’s that as an entertaining pre-season finishes level.

Leon Balogun headed Rangers in front before new boy Nuno Tavares got his Arsenal career up and running with a goal.

Cedric Itten’s header then looked to hand the home side the victory but the Gunners fired straight back through Eddie Nketiah.

Thanks for joining me, folks! Stay tuned for a full match report to come.

86 mins: There’s still a great intensity to this with Arsenal not letting Ramgers out of their own box right now!

Hector Bellerin and Willian will both feel they should have done better after winning the ball from close range.

They look like they really want the winner here.

Fine finish from Eddie Nketiah who wins the ball in the box before cutting inside and coolly firing through the goalkeeper’s legs.

It’s been an entertaining game, this!

80 mins: Great chance for Rangers to put the game to bed as Kelly’s effort is saved at point-blank range by Hein in goal.

The home side could eaily be out of sight, when in reality it should be Arsenal who are out of sight after a half of dominance without enough cutting edge.

75 mins: Rangers are back in front and it’s more set-piece issues for Arsenal as Cedric Itten heads home from the corner.

The Gunners have spent much of the game on top but have been undone twice in the simplest of ways.

It’s a well taken header from Itten, who now looks like he fancies another as Rangers win another free-kick.

You’d be forgiven for not realising there was a different goalkeeper in the nets, as the Estonian has had barely anything to do so far.

65 mins: The fresh legs of Arsenal’s new attack nearly score straight away as Willian tees up Tierney’s cross before Nketiah’s effort flies wide for a corner.

62: Sead Kolasinac, Reiss Nelson, Joe Willock, Ainsley Maitland-Niles, Eddie Nketiah and Willian are all on, with Aubameyang, Partey, Smith Rowe and Tavares among those to be withdrawn.

61 mins: End-to-end feel to this game with Rangers beginning to give Arsenal some more to think about.

Calvin Bassey cuts inside before firing an effort over.

Meanwhile. we have another raft of substitutes about to enter the fray…

54 mins: Tierney is penalised for a late challenge on John Lundstram giving Rangers a good opportunity from a set-piece.

Another lovely Tavernier cross is met by Lundstram but the midfielder can only head over.

Arsenal still looking vulnerable from set-pieces for all the good work they’ve put in so far.

53 mins: Rob Holding, who is sporting a new shaven trim in the Scottish heat, heads over from a corner.

Arsenal seeing all the ball once again at the start of this second half.

A smart move from Arsenal sees Lacazette neatly conjure a chance for Smith Rowe, who’s curling left-footed effort is tipped past the post at full stretch by McGregor.

Thomas Partey looks to get the Gunners off to a good start in the second half as his fierece strike is parried away by McGregor.

46 mins: Back underway at Ibrox with a number of changes for both sides.

Former Celtic man Kieran Tierney is one of those who has come on.

The referee blows for half-time and it’s all level in this lively cross-border clash between Rangers and Arsenal. 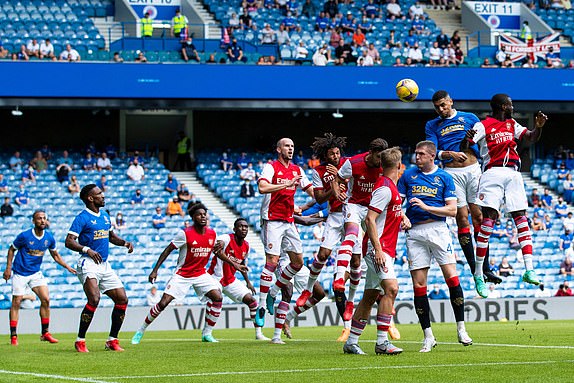 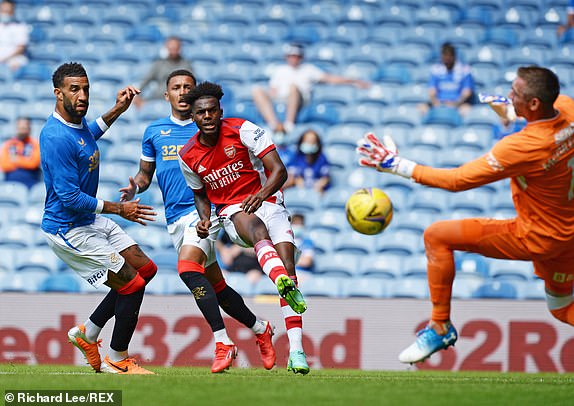 44 mins: It’s certainly Arsenal who are on the front foot right now as they push to go in front before the break.

They manage to win a free -kick on the edge of the box with Pepe and Partey standing over it. It’s Partey who strikes over the Rangers bar.

More excellent work from Smith Rowe forces McGregor to save straight into the path of Aubameyang who has virtually an open goal.

His limp finish is straight into the path of Bassey who somehow manages to clear before Smith Rowe fires over the rebound.

36 mins: Defoe comes off in place of Scott Wright.

33 mins: McGregor saves! Arsenal are beginning to cause Rangers real problems as Aubameyang feeds Balogun into a one-on-one situation.

The youngster manages to poke a shot away but the ‘keeper is equal to it before it rebounds back into safety.

Meanwhile, Jermain Defoe looks like he may be coming off after going down relatively unchallenged.

A delightful inswinging cross comes in but the striker can’t make proper contact with it and it goes wide.

The left-back does excellently to dispossess Tavernier before a fine touch and finish by the left-back with his right foot.

Not a bad way start your Arsenal career!

20 mins: Wide from Pepe! A slick move from Arsenal starting with Smith Rowe and Aubameyang sees the winger bend it wide from the right.

First signs of life from Arsenal and it’s no surprise Smith Rowe was the source.

14 mins: Rangers are in front! The resulting corner is whipped in once again by Tavernier and Leon Balogun loses Tavares to head the home side in front.

12 mins: Nasty challenge by Pablo Mari sees him become the first name into the book.

The defender really had no choice but to commit the foul after a bursting break from Calvin Bassey down the left. The left-back receives some treatment but is up and ready to go again.

The resulting free-kick is dangerous and Arsenal can only head bheind.

10 mins: What a chance! Aubameyang fluffs his lines after an absolute gift from Allan McGregor inside the box.

The ‘keeper passes straight to the striker, who has time to set himself but fires his finish well over the bar.

Not the start either player would have wanted, you’d think!

8 mins: Arsenal manage to break as Balogun finds himself in acres of space on the left-hand side.

The youngster cuts in but is seen to well by John Lundstram who puts in his second important intervention of the game already.

6 mins: It may be a pre-season match but it’s been a fast-paced start from both sides so far, particularly from the home side, which you would expect with Rangers further along in their pre-season preparation.

They zipping it around with confidence and really looking to take the game to Arteta’s side so far.

The 27-year-old’s prescence alongside Finland World Cup star Glen Kamara and veteran Steven Davis looks like a strong midfield for Steven Gerrard’s side.

2 mins: Bright start by Arsenal as Cedric frees Smith Rowe down the right. The youngster’s cross is deflected away for the game’s first corner.

The kick is cleared away by Rangers who eventually dispossess Arsenal before winning the free-kick.

It is the first time Gunners fans will get to see new left-back Nuno Tavares in action.

The 21-year-old joined the North London club for £6.8million from Benfica and arrives with a good reputation from Portugal. 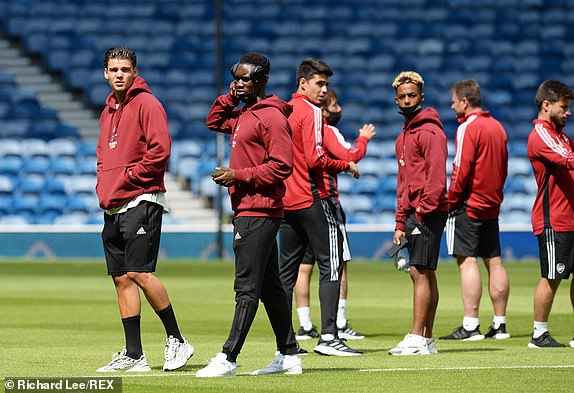 Hello and welcome to Sportsmail’s live coverage of Arsenal’s pre-season tie against Rangers at Ibrox.

Mikel Arteta’s side are continuing their preparations for the new season and will hope to bounce back against the Scottish champions following a 2-1 defeat by Hibernian in midweek.

Steven Gerrard will be hoping they can provide another test for the Gunners as they look ahead to beginning their title defence in just a fortnight’s time.

Stay tuned for line-ups, build up and match commentary here…