The Ibrox club suffered their sixth straight cup defeat at Scotland’s national stadium after failing to capitalise on periods of intense pressure in a shock 1-0 defeat by Aberdeen.

Missing key strikers Alfredo Morelos and cup-tied Kyle Lafferty, Gerrard admitted his side earned their just deserts for a lack of quality in the final third. 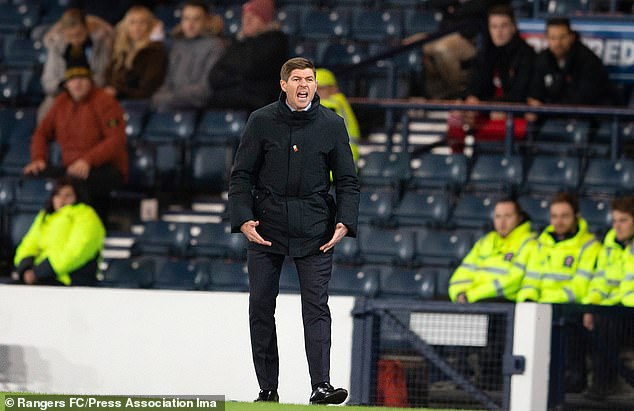 And in a stark warning he will go out and sign new players if that’s what it takes to win trophies in future, the England legend admitted: ‘It’s very tough to take. This one will hurt for a while.

‘It’s Aberdeen’s day, we wish them well. They deserve to go through because they created that bit of magic in the business end of the box and punished us on a set piece.

‘We got what we deserved. The performance was fine, it was quite good up to a certain point.

‘But there was a serious lack of quality and a serious amount of bad decisions in the final bit of our play today.

‘We didn’t deserve to score.

‘But what I’ll assure everyone is that won’t be our last semi-final.

‘If it means I have to go and buy better quality players for when we get to this stage, that’s what will happen.’

A suspension for top scorer Morelos was augmented by the absence of Northern Ireland international Lafferty.

‘They were sorely missed,’ Gerrard admitted.

‘We carried Thursday night’s lack of quality, that final bit when you get into that good area where you’ve got the opposition panicking and on the back foot.

‘You want someone to have the courage, belief and quality to go and make the opposition pay.

‘We had none of it today for 90 minutes on a glorious pitch within a good performance. I don’t think anyone played badly but as a team we had a serious lack of quality. We’ve played two 90 minutes without creating a clear cut chance.

‘We’ve got ourselves to blame. But I give the game plans and tactics, so the buck should stop with me. If there are any fingers pointing, point them at me.’ 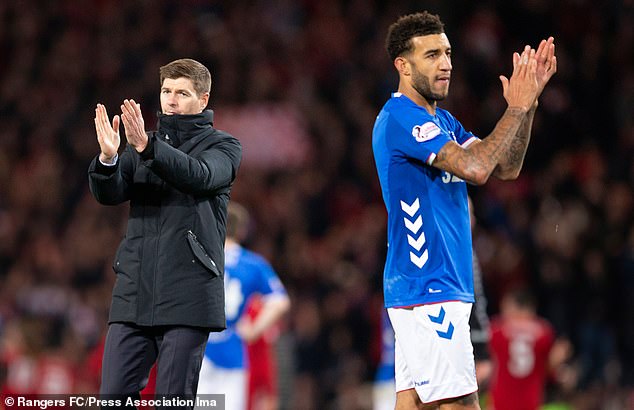 In the absence of Morelos and Lafferty Gerrard gambled on handing Nigerian under-23 international Umar Sadiq his first start.

As the Ibrox side chased a late equaliser the on-loan Roma striker earned criticism from his manager for earning a yellow card from referee John Beaton for diving in search of a penalty as he tried to round Aberdeen keeper Joe Lewis when standing up and converting the chance looked the better option.

‘We’re Rangers, we are a big team and we should play with a centre forward,’ added Gerrard.

‘To be fair to Umar, in the last two or three weeks he had shown signs of improvement.

‘Whether it’s enough, we’ll have to judge that moving forward.

‘His performance up until the final bit today was okay. We can’t point fingers and blame Umar.

‘What I would say to him is if you go around the ‘keeper, stand up and put the ball in the net.

‘Don’t dive or you are going to get a yellow card.

Asked if the striker could have carried on and equalised instead of diving Gerrard added: ‘100 per cent’. 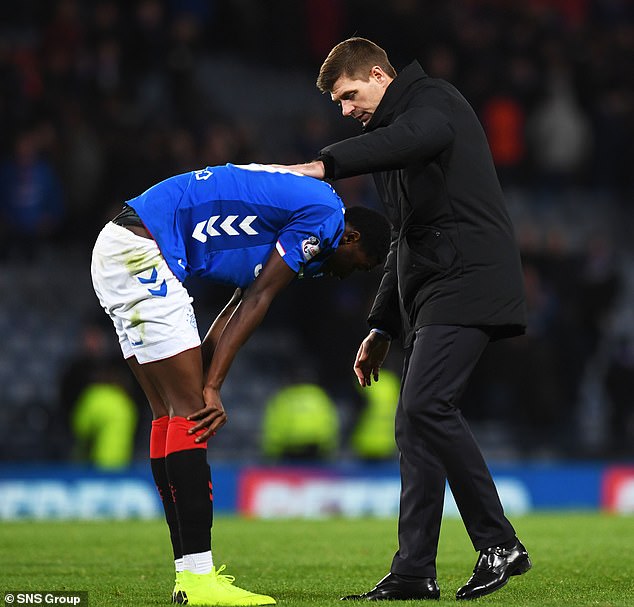