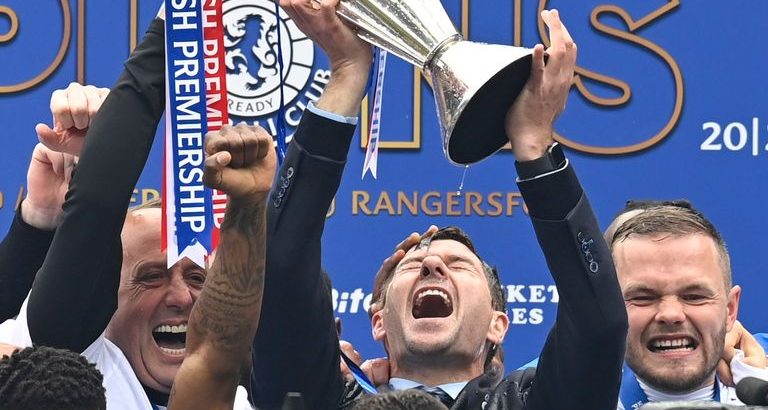 Steven Gerrard insists he will never again let the chance to savour the sweet smell of success pass him by after soaking up every second of Rangers’ champagne moment.

The Ibrox boss was doused with bubbly by striker Alfredo Morelos as new champions finally got their hands on the Premiership trophy.

But Gerrard did not mind one bit as his lifelong wait to get his hands on a league winner’s medal was finally satisfied.

He has presided over a Rangers line-up that has now written their names into the record books, with a 4-0 win over Aberdeen sealing an unbeaten campaign that has seen a stack of records fall.

But, while his players jubilantly tossed the silverware aloft, the former Liverpool skipper stood back and took it all in.

It was the moment when all the pain of his repeated Anfield slip-ups were washed away.

And Gerrard cannot wait to sample it all over again: “I’ve got a lot of experience. I’ve been a professional since I was 17 years of age. Sometimes these moments pass you by when you’re younger.

“But I won’t let another one of these moments ever pass me by again. What you have to sacrifice for moments like this, family-wise, on a daily basis – getting up really early, working late at night, sleeping through the night with stuff on your mind…

“I wanted to enjoy this moment because it’s been a long time since I’ve smelled this success and the champagne.

“I absolutely stink right now. It feels really good and I want more of it. I’m as hungry as anyone.”

Gerrard will now look to guide Rangers back to the group stages of the Champions League next term.

The pinnacle of his career came in 2005 when he led Liverpool to victory in that competition – an achievement he says is now matched by his first trophy win as a boss.

“It’s right up there, because I love winning,” he said. “That is my drive, that is my buzz, that is what I get out of bed for in the morning. My family will always be number one in my life, football will be number two.

Rangers as a club have had as much agony to endure as their manager.

But exactly 10 years to the day that the club were last crowned champions, Gers completed a journey back from oblivion to the top of Scottish football.

Some, like skipper James Tavernier, have experienced more hurt than others.

Sitting alongside his captain in the post-match press conference, Gerrard said: “Some of the numbers the players have posted this season has been really impressive.

“But when the dust settles we’ll hit reset to go again. The expectation will go up but that’s what happens at a club like this.

“It’s special for all of us because we all worked ever so hard for it.

“The players deserve all the plaudits for it. And this fella next to me, James Tavernier, has been through more than most.

“I’m so pleased for him personally – as well as his team-mates – because they’ve given me absolutely everything.”

Rangers rounded off their season in style, with Kemar Roofe netting a double in between Joe Lewis’ early own goal and a late Jermain Defoe strike.

Dons boss Stephen Glass said: “In the first half we weren’t good enough. We showed Rangers a little bit too much respect. We didn’t get close enough to them and allowed them to play.”

“It’s a fantastic achievement, but even Steven touched on it, the work starts again on Monday to prepare for Champions League qualifiers and next season. That’s the nature of being at a huge football club.

“I’m sure Steven will be looking at strengthening the squad. Better quality players, that might sound stupid given they’ve ran away with the league but Celtic will come back stronger. Rangers will have to improve. That’s the nature of being at a big club.

“Celtic will spend money, they’ll have to throw a lot of money at this to turn this around. Rangers are in a good position with the players they’ve got, and if they can get into the Champions League it would be a massive stride in the right direction – to hear that Champions League anthem at Ibrox then I think the supporters will say ‘We are really back’.”