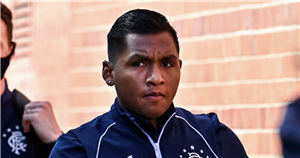 The Colombian striker and Brazilian midfielder both featured for their clubs against Celtic and Leicester respectively this weekend – before becoming the targets of abuse from trolls.

While Fred’s Instagram account was hit with several instances of racist abuse, Police Scotland have opened an investigation into an offensive social media post that was aimed at Morelos.

A spokeswoman for Police Scotland said: "An investigation is underway after we received a number of complaints regarding an offensive social media post and enquiries are ongoing." These latest accounts of sickening abuse come after Oliver Dowden – the Secretary of State for Digital, Culture, Media and Sport – insisted that the law will be changed last month.

He tweeted: "Online racist abuse of footballers is absolutely shocking and must stop. In advance of this recent spate of cases, I called a meeting to hear first-hand accounts of the daily abuse players receive and the awful toll it takes on them.

"We are going to change the law to make social media companies more accountable for what happens on their platforms and they can start showing their duty of care to players today by weeding out racist abuse now.

“Players must not be abused for doing their jobs, enough is enough."

Both clubs then agreed that they would stand together rather than take the knee before the fixture, after Steven Gerrard’s captain James Tavernier had spoken to the media.

He said: “What we did was stand up to send out a bigger message that we need action on these things that are occurring regularly now. We wanted to send out a strong message and it was an easy decision.

“You saw the situation on Thursday and that is going to get taken care of. But I feel confident saying that all our black players have received racial abuse this season. That’s from social media platforms and this is a key message to them." United have previously condemned the abuse that had been directed at their players by "mindless idiots”.

A spokesperson for Facebook, which additionally owns Instagram and Whatsapp, told Sky Sports News earlier in the year: "There is no place for hate speech on Instagram and we have taken action to remove accounts and comments following the abuse received by Axel Tuanzebe this weekend.

"We are always working on new ways to tackle racism on Instagram and will have more to share soon."