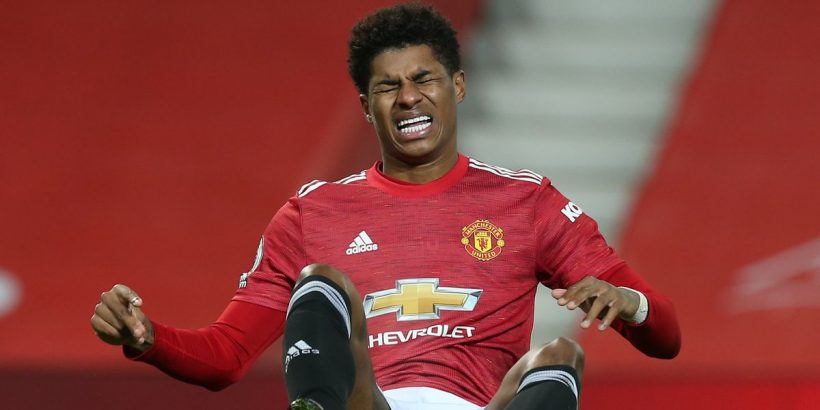 Marcus Rashford has handed Manchester United a huge injury blow with the striker set to undergo surgery on a long-standing shoulder problem.

That surgery could reportedly rule the England international out of action for as many as three months, delaying his return to club action until October.

He has been managing the issue for much of last season, taking pain-killing injections to allow him to feature for the Red Devils as they reached the Europa League final.

Despite still being affected by the injury, Rashford was called up for the England squad for Euro 2020, though was limited to substitute appearances for the Three Lions.

And with the injury still causing him problems, the Daily Telegraph report that Rashford has decided to push ahead and go under the knife.

It is stated that the injury is a muscle tear on his left shoulder and while surgery is not yet considered necessary, the player himself is concerned that it will not get better.

He is also said to be worried that his movement will be negatively affected if the surgery does not happen, with the injections not a long-term solution.

The Telegraph claim that Rashford wants to have the surgery as soon as possible, but it is unlikely to take place until the end of this month.

Who will win the Premier League next season? Comment below.

It deals a huge blow to Ole Gunnar Solskjaer’s hopes of guiding United to their first Premier League title since 2013.

Rashford has been a key part of the Norwegian’s side, scoring 21 goals as he made the most appearances of anyone other than Bruno Fernandes.

But if he is indeed ruled out for the full 12 weeks, he would miss United’s first eight top-flight matches, their first three Champions League group stage games and England’s autumn internationals.

United are believed to have encouraged their player not to rush a decision as he is set to go on holiday for a fortnight, but Rashford believes an operation will be in his long-term interest.