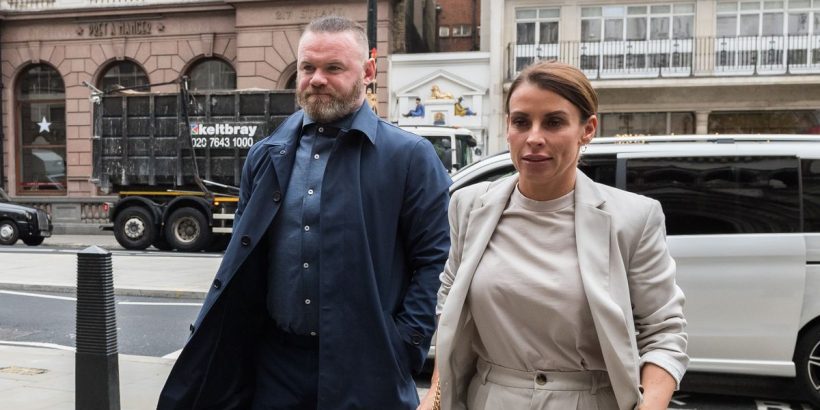 There's a reason this feud between Rebekah Vardy and Coleen Rooney has the nation on tenterhooks – because of absurd moments like this.

The Wagatha Christie trial has been in full swing for the past three days, with Rebekah and Coleen at loggerheads. Husbands Jamie and Wayne have been doing their best to keep out of the firing line, but Rebekah's lawyer, Hugh Tomlinson QC, managed to take a hilarious pot-shot at the Derby County manager while Coleen was on the stand.

Challenging her insistence that she "believes" Rebekah was the leaker, Tomlinson told Coleen: "You might believe Derby County might win the Premiership in two years’ time. It’s not evidence is it?"

According to those inside the courtroom at the time, the Manchester United legend – who was there supporting his wife – maintained a poker face and didn't react.

"SIR Hugh Tomlinson QC, from now on," one person tweeted in response to the brutal jibe.

"10/10 for Hugh Tomlinson," another wrote, while a third posted: "Absolutely savage hahah exactly what the fans came to see."

Rooney's Derby were relegated to League One last month despite a valiant effort in light of a points deduction after the club went into administration back in September.

If the Wagatha Christie trial was settled by a scrap between Wayne Rooney and Jamie Vardy, who do you think would win? Let us know in the comments section.

The feud began back in 2019 when Mrs Rooney wrote an unintentionally hilarious post explaining that posts from her private Instagram account were being leaked to The Sun newspaper – eventually revealing that the culprit was Mrs Vardy's account.

Vardy denied the claims, insisting her account had been hacked before suing Rooney for defamation, and later for libel.

Earlier this week, Mr Rooney was "done dirty" by the courtroom sketch artist, with fans on social media in bits saying he looked like an Orc from The Lord of the Rings.