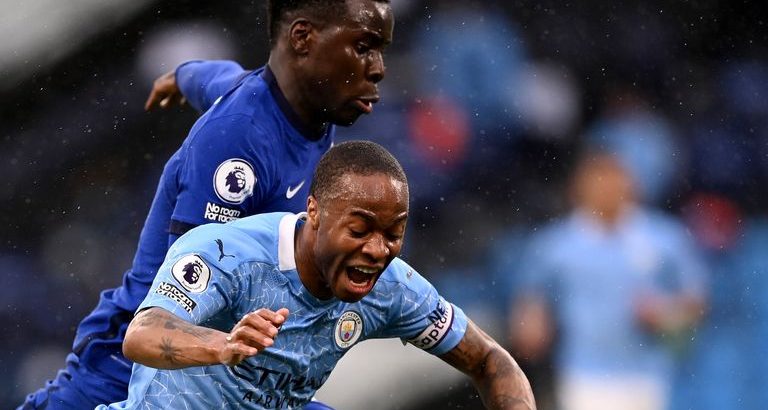 Should Raheem Sterling have been sent off? Were Man City denied a legitimate penalty against Chelsea? Were Man Utd penalty and Ollie Watkins red right calls? In the latest Ref Watch, former Premier League referee Dermot Gallagher runs the rule over the big incidents of the weekend, with Raheem Sterling at the heart of the action.

INCIDENT: Raheem Sterling catches Timo Werner with a lunging tackle. VAR takes a closer look but officials at Stockley Park decide against upgrading his yellow card to a red. Should he have been sent off?

DERMOT SAYS: “I think not. It’s not a good tackle but he’s one-footed, he’s low, he doesn’t travel too far.

“It’s a high-tariff yellow card but I wouldn’t expect him to be sent off for that.”

INCIDENT: Sterling later goes down in the box under Kurt Zouma’s challenge but VAR judges the defender not to have fouled the England international. It proved a crucial decision as Chelsea broke clear at the other end and wrapped up victory.

DERMOT SAYS: “If the referee gives a penalty on the field, I’d say, ‘Clumsy,’ and we’d move on. Because the ref doesn’t give a penalty, that’s why we’re talking about it.

“It’s the safer option to give a penalty for that. I can’t explain it. Zouma is clumsy, doesn’t get the ball and I think it’s a penalty. Once Anthony Taylor decides it’s not a penalty, VAR can’t say it’s a clear and obvious error.

“If the penalty had been given, the VAR wouldn’t have overturned it. However you cut it, this is an on-field decision.”

DERMOT SAYS: “You have to look at each penalty incident individually. I think this is a penalty. Jesus pushes the ball one way, tries to protect the ball with his body, and Gilmour catches him.”

DERMOT SAYS: “Can I understand Dean Smith’s frustration? A little bit. Yes, I think it is a penalty. Chris Kavanagh has got the perfect view. Luiz quite clearly catches Pogba in the back of the legs.

“We talked about Sterling earlier – Zouma caught him in the back of the legs and I thought it was a penalty so I can’t say that’s not a penalty. If you ask for consistency, I think all three [Zouma, Gilmour, Luiz] are penalties.”

INCIDENT: Smith’s ire is further compounded as Ollie Watkins is booked for simulation – the second yellow card drawing a red one – after a battle for the ball with Dean Henderson.

DERMOT SAYS: “I think one of the secrets of refereeing is to retain options and in this situation, there’s three options.

“I do think there is a bit of contact, but I don’t think he dives. I think he is very unlucky and if the referee looks back at what I’ve seen now, which he couldn’t on the day, he may well have made a different decision.

INCIDENT: Should Villa have had a penalty of their own when the ball catches Mason Greenwood on the arm?

DERMOT SAYS: “Proximity to the ball, certainly. You see him jump with his arms up, the ball comes off Douglas Luiz and he’s so close [to the ball], he’s got no chance to get out of the way.

“His arm is up – but is it up to go towards the ball? I think not. He’s taking his arm away. Play on was the correct decision and the VAR agreed.”