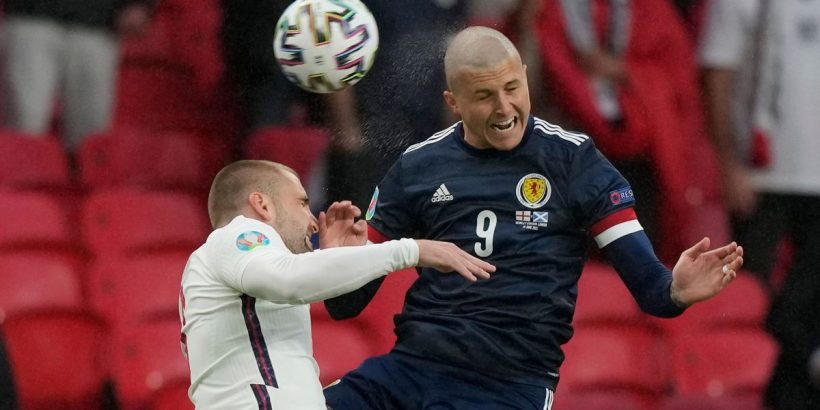 Scotland striker Lyndon Dukes has revealed he was told by the referee to apologise to Luke Shaw after clattering into the England defender during their Euro 2020 stalemate.

The two old rivals played out a bore 0-0 draw at Wembley on Friday night, with Scotland frustrating Gareth Southgate's men and even coming close to snatching all three points themselves.

Dykes, who plays in the second tier of English football at club level with Queens Park Rangers, was one of several visiting stars who performed impressively on the night.

His physicality upfront was a problem for Three Lions stars to deal with – especially Shaw, who was taken out by the QPR frontman early on.

And Dykes says referee Antonio Mateu Lahoz, who had been warned about his aggressive reputation before the game, asked him to apologise to the Manchester United star despite not awarding a foul.

“I think I just caught [Shaw] with my knee on his leg,” he recalled in an interview with The Scotsman.

Do you think Scotland will reach the Euro 2020 knockout stages? Let us know in the comments section below.

“The referee actually pulled me beforehand and tried to warn me for my headers and stuff. He pulled me up in the warm-up. He (then) tried to get me to say sorry."

The 25-year-old then added: “Obviously I smashed him a bit there and I think from that a few of the boys didn’t really want it in the England team." Dykes set the tone for a rough and tough encounter with England by shaving his head before their crunch Group D clash under the Wembley arch.

“It was a big game for us and the boys know that, when they see me with the shaved head, we mean business,” he said.

“So I went in and got a straight zero on the clippers. The boys loved it. They knew it meant we were going to turn up. I do it myself, just get the clippers out.”

Scotland need to beat Croatia in their final group outing on Tuesday to progress to the knockout stages, while England can top the group by beating Czech Republic.