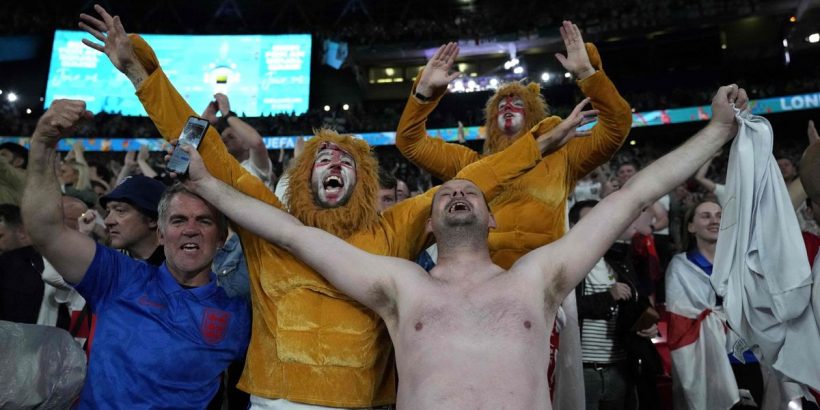 Drink it in. Treasure the moment. Soak up how warm and intoxicating it all feels.

Take the day off work. Ring in sick (some people might feel a bit rough, to be fair) and adsorb a moment in time when it felt like the clock had stopped.

England have reached the final of a major football tournament.

It's a simple sentence, but one those of an older generation feared they would never get to read.

As for those of a younger ilk who have not experienced a different kind of sentence, one of constant pain, failure and torture, you don't have the first clue how lucky you all are.

Imagine coming into a world in which the Three Lions reach the latter stages of competitions on a regular basis?

Well now we do, thanks to Gareth Southgate and his band of brothers who wear the shirt with such pride, class and distinction.

Remember those times when Fabio Capello said that same famous shirt weighed heavily on the players' shoulders? When Southgate admitted he couldn't bring himself to listen to Three Lions because it brought back painful memories of the past?

"I would just walk out of the room," Southgate once said, "it's an anthem and it has followed the team for a long time, but that has involved some difficult moments."

Heck, some people will even swear they caught Southgate humming and singing along last night to the song he grew to hate.

It was a privilege to be inside Wembley to see England do what Southgate had asked them to do – create some iconic images that will never fade from our consciousness.

The place was a wall of noise. Three Lions boomed around a cavernous stadium full of life, colour, emotion and expectation thanks to more than 60,000 supporters drunk on delirium.

The sun shone and the beer flowed. Some hard men were reduced to tears, while others stood there opened mouthed, unable to comprehend the magnitude of it all.

It felt good to be alive again.

And just for once, the Three Lions rose to the occasion instead of shrinking. They seized the moment and embraced it instead of being intimidated.

That's because Southgate has fostered a fearless group of players who are now immune to stage fright when glories are to be had.

Like Harry Kane insisting he is unstoppable. Or Raheem Sterling speeding past defenders like a man possessed. Or Harry Maguire and John Stones vowing that no-one shall pass, just like that legend Sir Bobby Moore used to do.

That's the thing now. Southgate and his modern marvels have given themselves the chance to go on and become genuine immortals like those boys of 66.

To win a trophy, on home soil to boot, to change their lives forever and engrave their names into footballing folklore.

These chances come around once in a lifetime and have to be taken. Reaching the final to banish the ghosts of all those lost semis is special, no doubt, but lifting some silverware for just the second time ever would be truly extraordinary.

Nobody would ever forget it.