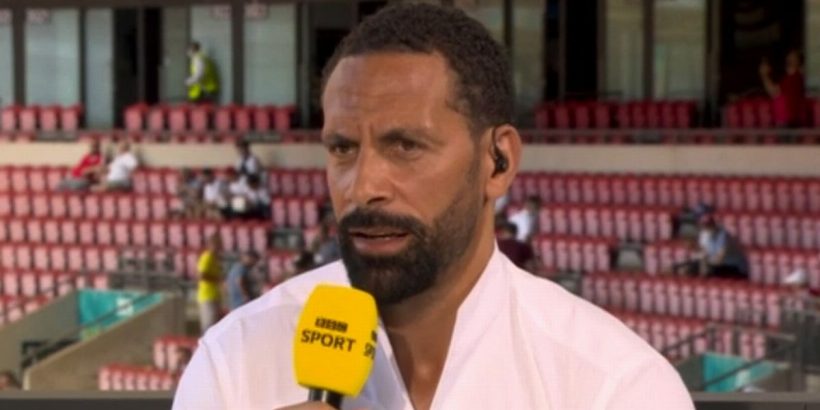 Rio Ferdinand has revealed he couldn't help but have a joke at Sir Alex Ferguson's expense after Scotland lost their opening Euro 2020 group game while England took all three points in theirs.

The former Manchester United defender was in the middle of recording his Vibe with Five YouTube show when he opted to drop his ex-manager a text as he revealed that the Old Trafford icon had been in communication with Ferdinand over the results.

Ferdinand said: "Sir Alex Ferguson has been on my phone all morning. Let me see if I can text him back right now! I'm gonna text him now: 'Are you OK boss?'"

Scotland finally ended their 28-year absence from major tournament football on Monday, but were on the wrong-side of a 2-0 score-line against the Czech Republic, a brace from Patrik Schick enough to resign the Scots to defeat, his second a lob from just inside Scotland's half.

Former Old Trafford stalwart Ferdinand claimed that Ferguson had been talking up Scotland's chances before a ball had been kicked.

"He thinks they [Scotland] are going to beat us [England]," Ferdinand explained. "He thinks they're going to overrun England. [I told him] they've got to get past this first game before that!"

The ex-Three Lions star then made it his mission to find as many Scots in his contact list as possible, before teasing former teammate Darren Fletcher, revealing "Who's the other one I've got on my phone who's been blowing it up? Darren Fletcher" opting to text the Scottish star "'Fletch, you alright?"'

The defender even stuck his neck on the line and gave his own prediction for England's Friday night clash with Scotland, messaging Ferguson to say "Scotland are getting beaten 1-0".

A win for Gareth Southgate's side would ensure England have one foot in the knockout stages, having already beaten Croatia in game one.

A Raheem Sterling strike was enough to ensure the Three Lions took all three points in their opening game, while a win for the Three Lions against Steve Clarke's Scotland would leave the Tartan Army on zero points with just one game left, ensuring they would be unable to catch England.

The pair meet at Wembley in a contest on Friday evening that pits Ferdinand's allegiances against those of his old manager's.