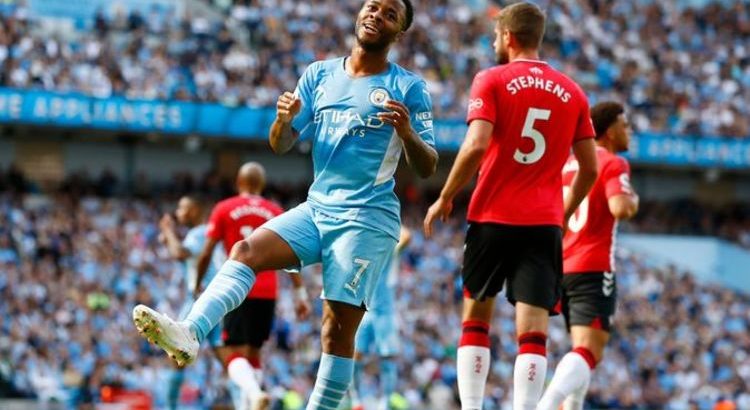 Rio Ferdinand has urged Liverpool to re-sign Raheem Sterling as the England forward’s Manchester City struggles continue. Sterling has been linked with a move away after being dropped by Pep Guardiola last season, with Barcelona reportedly interested.

Sterling played up front in City’s 0-0 draw with Southampton on Saturday, having a goal ruled out late on in the Premier League clash as he made just his second start of the season.

The 26-year-old starred for England in Euro 2020, and continued his good form for Gareth Southgate’s side in the recent World Cup qualifiers against Hungary and Poland.

But he has continued to be a bit-part player so far this season at City, with Guardiola having dropped him from his starting line-up for key games during the second half of the last campaign.

Reports have claimed Barcelona could move for Sterling in the January transfer window – and Ferdinand says Liverpool should act fast to sign the player they sold to City for £57million back in 2015.

JUST IN: Liverpool and Spurs could miss out on Kessie because of PSG policy

“It’s only because he’s been taken out of the team that he’s lost confidence,” the former Manchester United man said on his Vibe with Five show. “He was on fire. He was producing.

“This guy was the go-to guy when they needed a goal for so many years. All of a sudden, he’s in the wilderness. I’m just baffled by it; I don’t understand it.

“But this is the thing with Pep – he gets it right more often than not, but with this one with Sterling… there must be clubs sitting there going, ‘boy, let me see how this situation pans out because I will take Sterling all day’.

Sterling fell behind Phil Foden in the pecking order for City’s left-wing spot last season, while Jack Grealish has made the position his own so far this term since his £100m summer move from Aston Villa.

City have failed to score in both games in which Sterling started – although he netted late on against the Saints before his effort was ruled out by VAR.

However, Guardiola praised Sterling’s performance after the Etihad clash, saying: “He was so active in terms of movement.

“But football depends a lot on how good we do the process in build up and when it happens our strikers and wingers play better.

“Today we struggled a bit and that is why he didn’t get many balls but he was always dangerous and ready to try to do it.”

Barcelona were interested in Sterling last summer, and could look to sign him when the transfer window re-opens in January, according to reports from Spain.

According to Sport, Barcelona director of football Mateu Alemany travelled to England in the summer to try and lure Sterling to the club.

Alemany intended to negotiate either a swap deal or loan for the 26-year-old, but nothing came to fruition.

However, rather than moving on from Sterling, Barcelona are set to re-enter talks amid his inconsistent minutes so far this season.