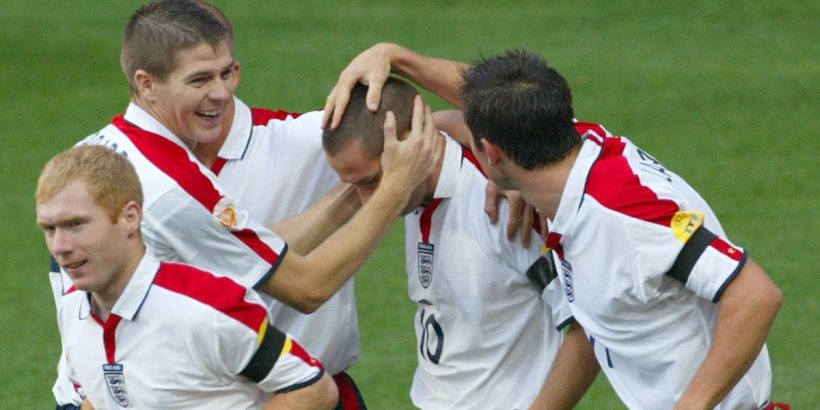 Scholes emerged as a Three Lions superstar at the same time as Frank Lampard and Steven Gerrard, causing a huge midfield selection headache for managers including Sven-Goran Eriksson.

Indeed, Eriksson famously moved Scholes to the left wing to also accommodate Lampard and Gerrard in his team, a decision Ferdinand has labelled as "disrespectful".

The former Three Lions centre-back says Scholes is his favourite ever team mate – and revealed just how grateful he was to share a pitch with him.

Discussing the trio on his YouTube channel, Rio Ferdinand Presents FIVE, he said: "Scholes is the hardest player to keep back because he's probably my favourite player that I've played with.

"He's going to be my man because he's done everything. I used to thank him for letting me be on the same pitch as him when we scored goals.

"I used to run up to celebrate all the time, I used to sprint up there after he's done something, set up a goal or scored.

"And I'd go, 'Scholesy! Thank you man, I love you man. Thanks man, thanks for letting me play with you'. I'd say mad stuff, Giggsy the same."

Despite heaping praise on Scholes, Ferdinand did admit that Lampard was the better goal-scorer while Gerrard would get fans out of their seats.

He added: "Frank's the most potent out of all of them, in terms of goals. None of those can get near Frank. Goals and assists: Frank dwarves everybody.

"Stevie was like Roy of the Rovers, he would drag a game by the scruff of the neck – big occasions as well. The problem with Stevie, I would have liked to have seen his impact in a great team.

"In great teams you usually share the load a little bit more. In his team, it had to be him. The ball had to go to him all the time."

He concluded: "If I'm a manager, I'm going to take Frank because he's going to get me 20 goals a year.

"If I'm buying a ticket to go to a game, I'm picking Gerrard. He has those explosive moments the other two don't have.

"He does stuff that make you go, 'Wow'. As a manager, out of Gerrard and Lampard, I'd go Lampard because of his goals and assists."

READ MORE: Gary Lineker has hilarious showdown with elderly woman after she found his phone in park