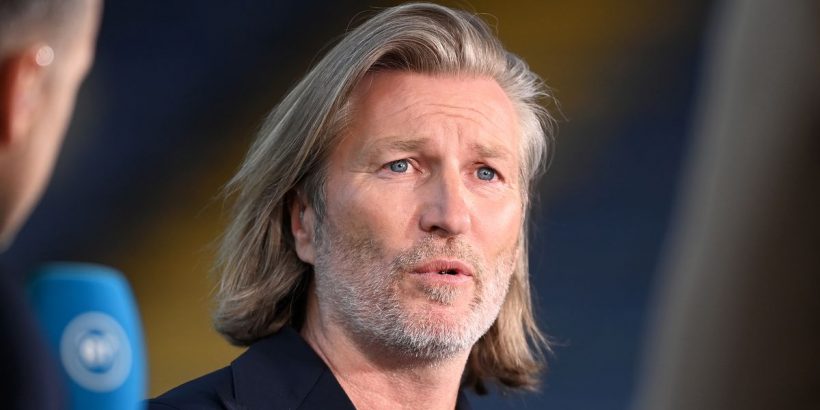 Robbie Savage had a meltdown live on TV during Wales’ Euro 2020 loss to Denmark – but fans all said the same thing.

The former Manchester United academy man was on co-commentary duty for his country’s 4-0 defeat to the Scandinavian side at the Johan Cruyff Arena.

And it was not an enjoyable experience for the 46-year-old, who was left audibly furious with the second goal.

Nice forward Kasper Dolberg had given Denmark the lead after 24 minutes with a stunning strike from outside the penalty box.

While Wales made a strong start to the second half, a Kieffer Moore attack was cut short with a crunching tackle from Simon Kjaer. As the Weslhman is left on the ground, Barcelona’s Martin Braithwaite quickly moves the ball down the right wing for a cross.

When Joe Rodon’s attempted clearance falls straight to Dolberg, the 23-year-old smashed it into the bottom-right corner.

Gareth Bale was seen remonstrating furiously with referee Daniel Siebert – and Savage made his feelings clear during the game.

Analysing the second goal for BBC ’s commentary, Savage said: "It was a foul but terrible defending. There's the foul… HOW was that not a foul?

Do you think a foul should have been awarded in the build-up to Denmark's second goal against Wales? Let us know in the comments section. "Surely that's got to be checked! It's a foul but they still got to defend better than this."

As the commentator was left furious at the lack of refereeing decision, viewers were left in stitches at his exasperation on Kjaer’s foul.

“Robbie Savage’s head is rolling. Love to see it,” one viewer said.

Another commented: “Robbie Savage will have "how is that not a foul?" on his gravestone.”

While a third suggested a new game, with: “Drink every time savage says ‘how is that not a foul’.” A fourth was not feeling so sympathetic, with: “Robbie Savage crying about the foul is making my Saturday so much better."

And a fifth added: “You reckon Robbie Savage is still talking about that ‘foul’.”

But a final viewer held nothing back, with: “Can Savage stop whining about the foul and how tired Wales are. It's embarrassing.”

Joakim Maehle and Braithwaite added the last two goals of the day for Denmark in the final minutes of the game, sending them to the quarter-finals against either Belgium or Portugal.