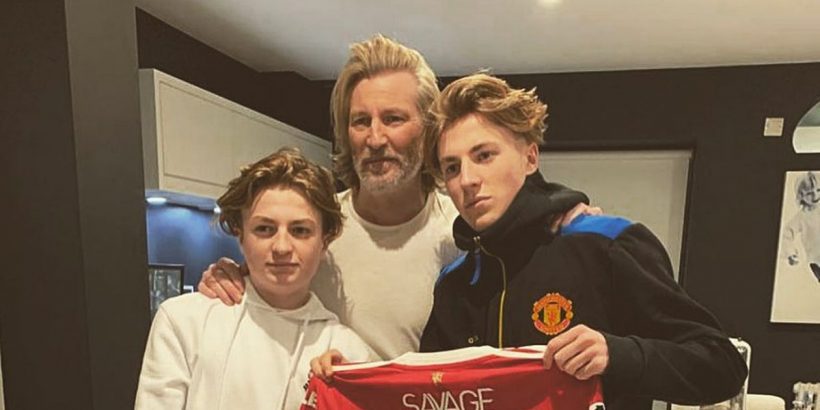 Robbie Savage has shared an emotional family picture after son Charlie made his Manchester United debut on Wednesday evening.

Charlie, 18, was brought off the bench by Ralf Rangnick for the final stages of United's Champions League clash with Young Boys at Old Trafford.

Robbie watched on from the commentary booth as the youngster did what his father couldn't manage – make a first-team appearance after progressing through the Red Devils youth ranks.

The former midfielder was understandably moved by the moment – he'd even been in tears before the game had begun.

And afterwards he expressed his joy in a social media post.

Robbie uploaded to Instagram an image of him with the United debutant and his other son, Freddie.

In the snap Charlie is holding his match worn shirt which seems to have been signed by all of Rangnick's squad.

The accompanying caption reads: "So proud of my two boys."

Charlie replied in the comments of the post with a love heart emoji, while retired stars Michael Owen, Nicky Butt and Emily Heskey each added clapping emojis.

Who is the best father/son football duo? Let us know in the comments section.

All three of the Savage contingent sport long blonde locks that Robbie has clearly passed onto his children.

The ex-Wales international had barely retired when Charlie, who is also a central midfielder, joined United's youth academy in 2012.

He has made his way up to the first-team picture, having trained with them under previous boss Ole Gunnar Solskjaer.

Following 10 appearances and two assists for the under-23s side in the Premier League 2 this season, Rangnick gave him his first inclusion in the senior squad.

He was one of six youngsters who were added to the matchday squad for the European tie.

Shola Shoretire, 17, made his fourth United appearance as a substitute, while Charlie was joined by 18-year-old Zidane Iqbal in making his debut.