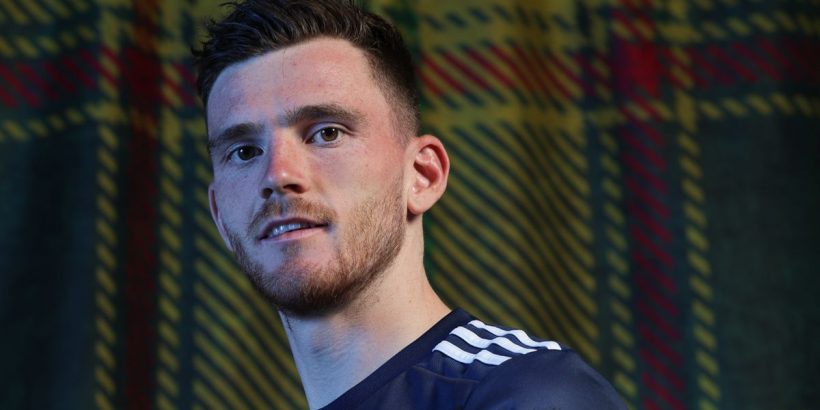 Andrew Robertson has surprised his Scotland teammates and backroom staff with personalised gifts ahead of Euro 2020.

Steve Clarke's side are competing in a major tournament for the first in over 20 years, having last participated in the 1998 World Cup.

To mark the occasion, captain of the national side Robertson treated the rest of the group to a Scottish-themed selection of presents.

Each player involved in the squad received a bottle of Johnnie Walker blue label whiskey and Irn Bru, as well as a can of Brewdog and Tennents.

The bundle also featured a pair of £300 Bang&Olufsen headphones, a copy of FIFA 21 and box of Walkers Shortbread Fingers.

"Scotland captain Andy Robertson, has surprised his full squad and backroom staff with a unique gift box ahead of the team’s first match on the 14th June.

"To celebrate Scotland’s 23-year wait for an international tournament, Andy has pulled together an extra special line-up of branded gifts which pay homage to the team’s roots.”

The Liverpool left-back shared an image of his own personalised box on Twitter, stating: “Thank you to all the brands that made this possible, very much appreciated.”

How do you think Scotland will perform at Euro 2020? Comment below. Scotland are first in action against Czech Republic on Monday afternoon as they play their opening fixture in Group D.

Up next after that is the highly-anticipated meeting with England next Friday, before finally facing Croatia on June 22.

The Scots secured their place at Euro 2020 in dramatic fashion, defeating Serbia 5-4 on penalties in their final play-off fixture back in November.