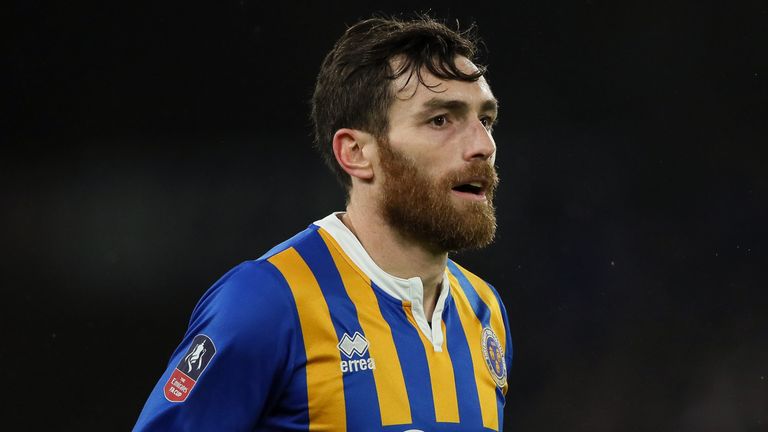 Stevenage midfielder Romain Vincelot, who was without a club in June, tells Sky Sports News about his extraordinary recovery from needing hip resurfacing surgery to being ready for his first league appearance in 13 months.

From struggling to walk and being in constant pain, to preparing for the Sky Bet League Two campaign and competitive football again…

It seems like a miracle but Romain Vincelot does not want to use that word. “It’s not a miracle because there is a lot of hard work and science behind it,” he says.

I played my first official game for over 12 months. We believe I’m the first professional footballer to come back from a hip resurfacing operation. I hope it opens a path for others because there’s no better feeling to be able to carry on doing what you love. Lot more to come 💪🏻 pic.twitter.com/9Atk3OVZca

“The people who helped me, my physio at Shrewsbury, the fitness coach, the doctor, they all did a lot of research about what to do and what to avoid and I put a lot of work in to get there.”

Vincelot has told Good Morning Transfers about his search for a new club, proving his fitness and, rather unusually, signing for a team in the National League but starting the season in the EFL.

The 34-year-old thought his career was over last year when doctors told him the cartilage in his hip had worn out. He describes it as “bone v bone”.

It left him struggling to sleep and he found it difficult to play with his young daughter.

Vincelot was told he needed a hip resurfacing operation in order to gain a quality of life.

He explains: “I couldn’t play with my little one, when I had to pick her up I was in pain.

“When she wanted to run I was struggling to run with her so I was thinking I have to get the surgery. I had to come out of the pain somehow.

“I had two things in my mind. I need to get better just to live and then if I can play football again that would be just the cherry on the cake.”

A similar operation to the one tennis player Andy Murray had, followed, an unprecedented procedure for a professional footballer.

Then it was four months of punishing rehab: “I really had some moments when I thought, maybe accept that your body just can’t take it anymore, but then there was the other voice saying, ‘no, no, no, you don’t know until you really try hard’. So it was a battle inside me.”

The midfielder was ready to make his first-team return for Shrewsbury in March, but the coronavirus pandemic saw the curtailment of the League One season.

Without a chance to prove his fitness Vincelot’s contract was not renewed.

He recalls: “I was thinking this is going to be a very tough time to be out of contract because people will have doubts and I understand that.

“I had to find a new club and I was thinking, wow, ‘this is not easy selling. 34-years-old, I’ve just had a hip resurfacing and my last game was in August’.”

Social media helped to win over any doubters. Videos of his fitness work were posted and they attracted the attention of a club in League Two.

Vincelot has now been training every day with his new club for the last two months and he is taking nothing for granted.

He said: “Pre-season doesn’t get any easier, I don’t know how many I’ve done over the years…It’s hard when you’re on the floor and just about to throw up because you’ve worked so hard, but I just think ‘yeah, I’m alive’.”

Off the field, it was unclear when he signed for the club which division he would be playing in.

Stevenage looked set to be relegated to the National League following the curtailment of the League Two season, but they were reinstated last month after the EFL won an appeal to inflict a harsher points penalty on Macclesfield over non-payment of wages. Vincelot said: “When I spoke with the manager they had good hope that they could stay in League Two and then I read about the case and thought there was a good chance.

“I was really hoping it was in League Two, but if it was in the National League it’s just another challenge to get out of there.”

The decision to uphold the EFL’s appeal meant that Macclesfield went down on points-per-game and Stevenage now begin their League Two campaign this weekend at newly-promoted Barrow.

If selected on Saturday, it will mark Vincelot’s first league appearance in 13 months and it will be an experience he will cherish.