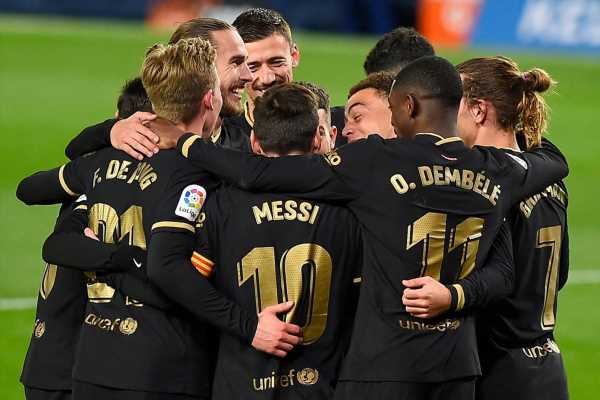 The headlines belonged to Lionel Messi but Ronald Koeman was more concerned with a complete team performance as Barcelona romped to a 6-1 win at Real Sociedad on Sunday evening.

Messi marked his record 768th appearance for the club with two goals and an assist, while Sergino Dest’s first LaLiga goals came in a pair, with Antoine Griezmann and Ousmane Dembele also on the scoresheet.

It was a fifth straight league win for Barca, who now sit four points behind league leaders Atletico Madrid.

Barca had to wait 37 minutes to make the breakthrough through Griezmann, but, with Messi laying on Dest’s first goal of the night moments later, there was only one winner from then on.

“I think we had a great game,” Koeman said in comments reported by Marca. “It was difficult for us to score the first one. After 2-0 we dominated the game and created many opportunities and were very effective.

“It is important in a complicated game to have that effectiveness. You have to have it to open the scoring because after that they begin to leave more space. Then we have punished them.

“The most positive thing is the image we have shown today. It is a demonstration that we are going for everything. It is always important to have people, apart from Leo, who score goals.”

Barcelona enjoyed 69 per cent possession on the night and Koeman was impressed by the way his side worked to win the ball back.

“We were able to press the opponent better,” he said. “We have improved our aggressiveness without the ball a lot. We have always created many opportunities but we have improved in different aspects.”

Sociedad could celebrate a fine goal from teenager Ander Barrenetxea, but, given it came when Barca already had five on the board, it was a rare bright spot on the night.

“It was not our best game,” forward Mikel Oyarzabal said. “It is clear they have been better than us. We have to learn from this too. You have to look at the good things from the beginning and keep working to get better for the next game.

“We leave the game with a bad feeling because they were able to take their chances and we did not. The second half was difficult – nobody likes to lose like that.

“The team has to keep fighting. You have to stay with that.”