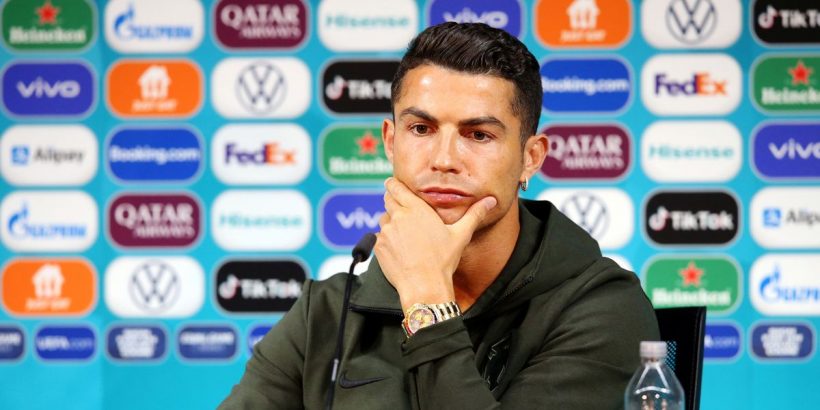 Cristiano Ronaldo displayed his professional approach to staying at the top of his game when previewing Portugal's opening Euro 2020 fixture against Hungary.

Portugal will play their first fixture of the tournament tomorrow afternoon as they look to defend their European Championship crown.

Ronaldo was given the responsibility of speaking at today's pre-match press conference and removed two Coca Cola bottles that were positioned in front of him before addressing the media.

The Juventus forward shifted the two drinks out of his sight before holding a bottle of water in the air and saying 'agua' – which is Portuguese for water.

This is not the first time the Juventus star has made clear he is not a fan of the soft drink.

The five-time Ballon d'Or winner has given a critical view on Coca Cola when discussing the habits of his son, Cristiano Ronaldo Jr.

"We'll see if my son will become a great footballer, he's not there yet," said Ronaldo at last year's Global Soccer Awards ceremony.

"Sometimes he drinks Coca-Cola and Fanta and eats crisps, and he knows I don't like it.

"Sometimes I tell my son to take a dip in cold water to recover after a run on the treadmill and he says, 'Dad, it's so cold there.' It's normal, he's 10 years old."

But this was not the case earlier on in Ronaldo's career, if Ryan Giggs' past comments are anything to go by.

Giggs confessed to telling off the Portuguese star during his Manchester United days after catching him drinking coke at breakfast.

Asked if he felt Ronaldo's behaviour was out of line, the former Wales international told the Utd Podcast: “Maybe. I don't know if I pinned him.