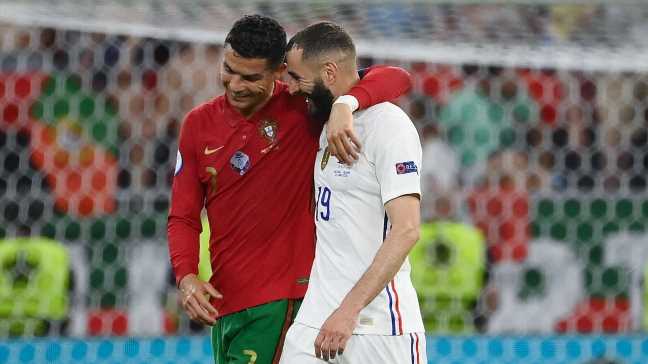 It was one of those nights. The kind of night that Cristiano Ronaldo owns and has owned throughout his career: the big occasion, the floodlights, the star-studded field, the high stakes, the obligation to deliver, the pressure and the tension.

It was Portugal vs. France, in the heat of Budapest, with Portugal at risk of being knocked out of Euro 2020. It was Ronaldo sitting just two goals shy of Ali Daei’s record for the most goals scored in men’s international football: 107 to 109.

And it was another night when the four-time Ballon d’Or winner indeed delivered.

His two goals — both from the penalty spot and the first he has ever scored against Les Bleus in this his seventh match against them — qualified Portugal for the round of 16, where they will face Belgium on Sunday in Seville (3 p.m. ET, watch live on ABC). More impressive, however, is his achieving yet another milestone, another incredible achievement: 109 goals in 178 appearances for Portugal.

He is relentless, a machine. The record, which seemed unattainable since it was set in 2006, will now be Ronaldo’s outright sooner rather than later. Maybe before the end of this tournament, in which he is already top scorer with five goals in three games. Or maybe when World Cup qualifying resumes in September.

For now, though, he has further cemented his status as one of the greatest of all time and as Portugal’s saviour. He bailed them out in this 2-2 draw, just like he’s done a million times before, on a night full of drama and controversy.

His game was not perfect, though — far from it. He misjudged a great opportunity for a header in the first half; he rarely got decent service; and apart from his two penalties, he only had one other shot on target. But he will never forget this day, the day when his legend grew even larger.

There will always be a debate over the fact that only 13 of his 109 goals have come against France, Germany, England, Italy, Spain, Belgium or the Netherlands; which means that many more were scored against (much) smaller sides. He won’t care, and neither should you. The numbers are extraordinary, just like his longevity, his drive and his ambition. He is not done, far from it. But Portugal and Ronaldo will need more in the knockout rounds than what they showed in the group stage if they want to retain their title.

Oddly enough, Ronaldo was not named man of the match. The award was instead given to the man he swapped shirts with at half-time: Karim Benzema. Without Ronaldo rewriting history, this would have been Benzema’s night. To be fair, the Frenchman is probably very happy to share it with his former Real Madrid teammate whose brace didn’t spoil his evening.

Wednesday actually marked the first time that Ronaldo and Benzema both scored in the same match as opponents; they netted in the same game 81 times as Madrid teammates. They also assisted on each other’s goals 19 times (11 times Benzema to Ronaldo, eight in the reverse.

France have their own reasons to be happy. Benzema’s first goals since he was recalled by Didier Deschamps will be weight lifted from his shoulders. He will be full of confidence and playing with freedom. If you were the Switzerland defence, who face the French on Monday in Bucharest (3 p.m. ET, stream live on ESPN), you should be worried.

“Of course, I was waiting for these goals,” Benzema told French television after the game. “There is a lot of pressure all around me. I didn’t doubt but I can feel such an expectation from the whole country, which is normal after five or six years of waiting. Celebrating with the fans warmed my heart and I hope there will be many more nights like this.”

On Zinedine Zidane’s birthday, Benzema overtook him as the oldest player to record a brace for France at the Euros (33 years and 186 days, vs. 31 years and 356 days).

Les Bleus took control of the game in the second half, and without Rui Patricio’s exquisite save on Paul Pogba’s wicked shot from distance and another penalty denied despite Bruno Fernandes’ foul on Kingsley Coman in the area, the world champions could have easily taken home all three points. They were again the commanding force that won the World Cup three years ago in Russia and are still very much the favourites to go all the way this year as well.

Pogba was superb once again, establishing himself even more as the leader of this team with another impressive performance. He and N’Golo Kante are still unbeaten when they start together for France. It’s been 29 games now and still no one has managed to better them.

However, Deschamps will rue the two mistakes that gifted Portugal two goals.

“We had to fight hard,” he said after the game. “We gave them two goals on two penalties and we made it difficult for ourselves. But we are top of our group, which is the best position to be in. A new competition starts now.”

On Wednesday in Budapest, we were reminded that two things are certain in football: Ronaldo will never stop scoring goals, and France will always finish top of their group under Deschamps in big competitions — now a perfect four for four.