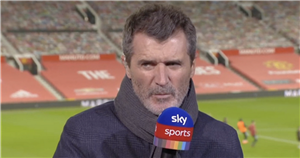 Eyes once again turned to the home of Manchester United to see hundreds more Red Devils fans protesting the ownership of the club.

The scenes mirrored those under a fortnight ago, when Liverpool’s first visit to Old Trafford was postponed as protestors gained entry to the ground.

While United fans are known to be opposed to the Glazer family’s ownership of the club, the Red Devils’ role in the breakaway European Super League has proved to be the straw that broke the camel’s back.

With discontent growing, ex-United skipper Roy Keane admits that the trust between the fanbase and the club hierarchy will be nigh on impossible to rebuild.

“They’re still frustrated. I think this bit of communication they’ve had the last week, I don’t think it’s really impressed United fans that much and rightly so, because, again, there’s a lack of trust. Why should they believe that?

“The images tonight, obviously we’re hoping the game will go ahead. As we get closer to kick-off United fans will turn up, they’re passionate.”

Worryingly, Keane believes the issue will get worse before it gets better, delivering an ominous verdict.

“There’s certainly no quick fix and I think United fans aren’t finished with this. We saw protests a couple of weeks ago but I think there’s plenty more to come,” Keane added.

“The big worry is when we come back next season, when obviously football stadiums hopefully are open to all supporters.

“Imagine 70,000 fans turn up at Old Trafford, all frustrated with what’s gone on. You think when there’s a full house here and there’s still that frustration and lack of trust with the owners.

“Things could get a lot worse.”

READ MORE: Man Utd use clever decoy tactic to throw off protestors ahead of Liverpool clash