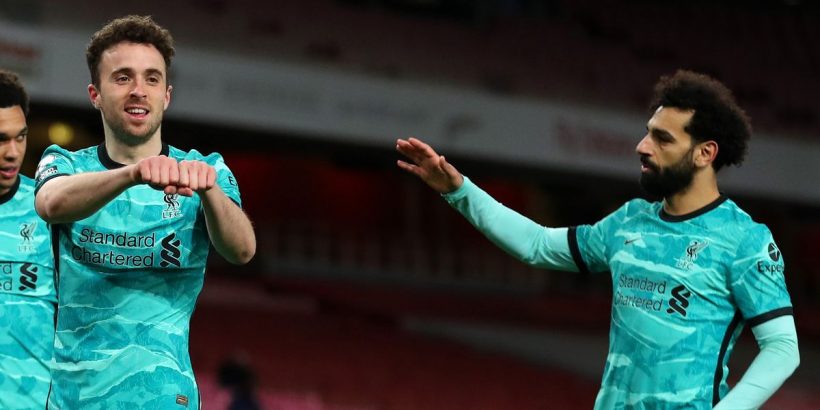 Liverpool star Diogo Jota’s stats compared to Mohamed Salah show how well the young forward has started at the club.

The forwards were both on the scoreboard as the Reds got back to winning ways with a 3-0 win against Arsenal.

And it was fourth game back in action for the Portuguese forward, who had been out for three months with a knee injury.

But it has not stopped the 24-year-old hitting three goals in that time, with two coming in north London against the Gunners.

It was just his 22nd game in the famous red shirt since arriving from Wolves for £45m last summer.

And a look at the stats show how impressive a start Jota has made to life at Anfield despite being hit by injury.

The Portuguese forward has played just over 14 full games for Liverpool in all competitions since joining.

And he has scored 12 goals in that time, hitting the back of the net at a rate of 0.85 strikers per 90 minutes.

They have come from 43 shots on goal to attempt a goal 3.1 times every 90 minutes and making a shot accuracy of 27.9 per cent.

When compared to Liverpool’s star man Salah, though, the numbers look even more impressive.

In the Egyptian’s first 14 full games for the Reds after arriving from Roma in 2017, he hit the back of the net 10 times.

That means a lower strike rate than team-mate Salah at 0.71 goals per 90 minutes.

And he needed more shots to score them at 59, attempting to score 4.2 times per 90 minutes for a lower shot accuracy of 19.6 per cent.

Jota’s efforts against Arsenal saw his side climb to fifth in the Premier League table, closing the gap to fourth-placed Chelsea to two points in the chase for a Champions League spot.

But Jurgen Klopp has a concern for the 24-year-old ahead of the quarter-final clash against Real Madrid.

READ MORE:Liverpool 'pause interest' on Nikola Milenkovic – and Diogo Jota is to blame