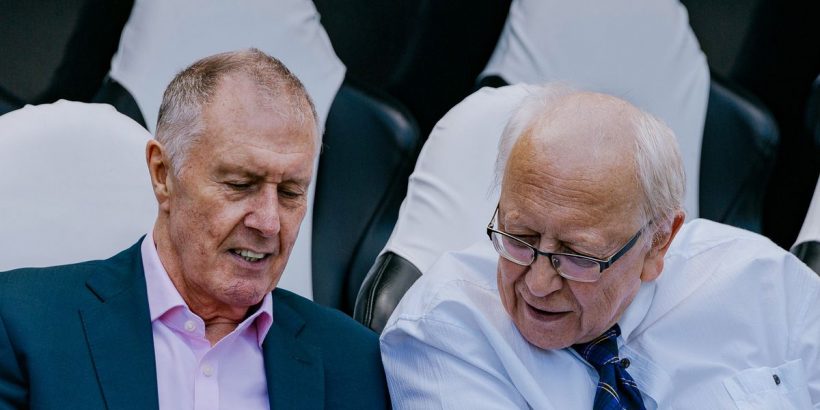 Sir Geoff Hurst was on hand to help a football-loving pensioner fulfil a lifelong commentary dream with a recreation of the iconic 'they think it’s all over' 1966 analysis.

Sir Geoff, who remains the only man to score a hat-trick in a World Cup final with his treble in England's 4-1 win over West Germany at Wembley, met with BT customer Bill at St James’ Park.

Having been taken to the iconic ground, Bill was surprised to see Sir Geoff waiting for him in the stands, with the trio then moving to the dugout.

Helping to fulfil Bill's lifelong dream, the iconic former West Ham striker played a video clip of his third and England's fourth goal in the 1996 final – over which Kenneth Wolstenholme's celebrated interpretation lives on.

Wolstenholme said in the closing seconds of England's greatest ever fixture: "And here comes Hurst! He's got… Some people are on the pitch! They think it's all over! It is now, it's four!"

Which piece of football commentary would you like to recreate? Tell us in the comments section below.

Sir Geoff, who is supporting BT’s pledge to develop the digital skills of the older generation by upskilling people to build confidence and support them to stay connected, said: "What BT are doing to get older people to connect with technology is fantastic.

"For football fans like Bill, good digital skills make a world of difference. Using technology better connects you to your club and other fans. It means you can check club news, live stream games, check scores and fixtures and book tickets.

"At my age, I meet a lot of football fans who are on their own and suffer with loneliness. I am fortunate that I’m in regular contact with my immediate family including a WhatsApp group called ‘Family Bants’.

"But there are people such as Bill who have very little family around them or none at all, so it’s a great thing to connect them – through technology – so they can speak to their mates or people they have lost contact with years ago."

Their Care Home Companions scheme was set-up by a group of BT employees in 2020 to help tackle loneliness in the UK, with around 140 volunteers making over 1600 calls to care homes in the North East during 2020.