His 133 career goals aren’t too shabby either although, as he reveals in this week’s Sky Bet EFL Q&A, not a patch on his hero Alan Shearer.

The 27-year-old has flitted around, from Swindon to Hibernian, Northampton and Crawley, taking in two stops at Shrewsbury Town with whom he won two of his four promotions from Sky Bet League Two.

The others were at Northampton and last season with Luton, who are aiming for a second successive promotion after climbing into the Sky Bet League One play-off places this midweek.

The engaging Collins names Virgil van Dijk as his toughest opponent and recalls having to change his name – sort of – as a trainee at Aston Villa because of the presence of the other James Collins (the former West Ham defender) at the club. 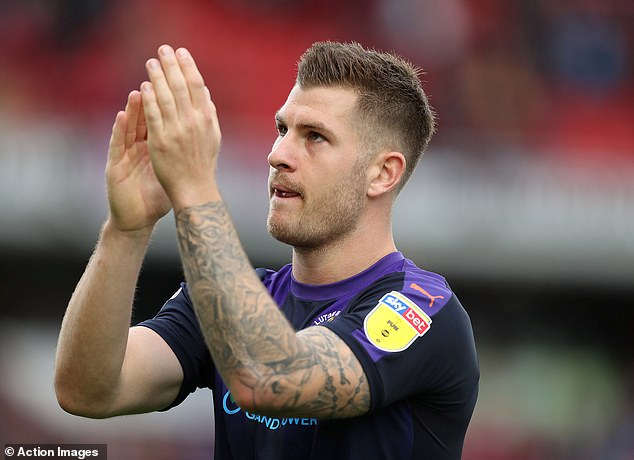 Describe yourself on the pitch in three words.

Describe yourself off the pitch in three words.

Best moment of your career so far?

I’ve been promoted four times, but I’d say the first promotion with Shrewsbury (in the 2011-12 season). I played a big role that year (scoring 16 goals) and I was only 21, so it was a big achievement really. We had a good side.

They have all been direct promotions, too, never at Wembley – runners-up three times and won the league once with Northampton (in 2015-16).

The first promotion is always special. We clinched it with two games to go. We knew that if we won, we would go up. We beat Dagenham & Redbridge 1-0 at home and I actually scored the goal that clinched us promotion.

Also, I scored at the Emirates for that year as well in the League Cup third round (Shrewsbury lost 3-1 to Arsenal in September 2011). Lukasz Fabianski was in goal and I think it was Alex Oxlade-Chamberlain’s first game for Arsenal. He had just signed from Southampton. Marvin Morgan crossed the ball for me and I scored with a header.

That was a lucky year for me, scoring at the Emirates and scoring the goal that clinched us promotion. When you’re 21, you think that’s going to happen every year, but we know in football that’s not going to be. 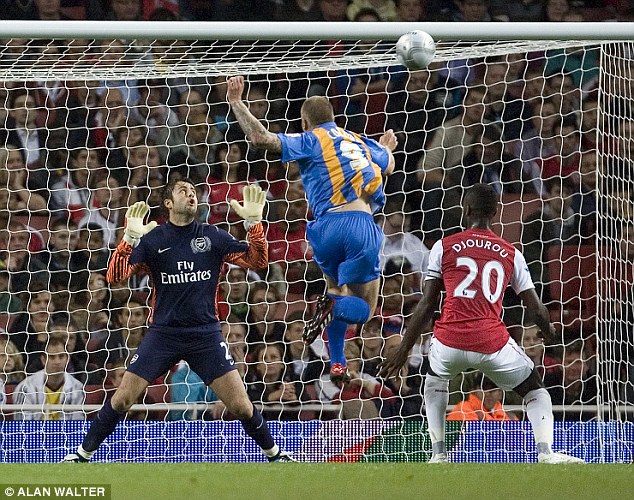 Who is the hardest opponent you have faced?

Virgil van Dijk. I played against him when he was at Celtic and I was at Hibs. That was the year that Celtic ran away with it in Scotland (the 2013-14 season). They were head and shoulders above everyone that year. They had a great side. Kris Commons, Leigh Griffiths, Scott Brown, van Dijk, Efe Ambrose. Van Dijk just had everything. As you can see now in the Premier League, he’s big, strong, quick, he’s good with the ball at his feet. He can head it. He’s not bad looking either, is he? He’s definitely the best I’ve played against.

I didn’t really know him the first time I played against him. He had only been in the SPL a year or two so I knew of him, but no more. I remember one game. We played them at home. It was on TV, they were 3-0 up and in the last five minutes they got a free-kick about 30 yards out. He stepped up, took the free-kick and whipped it in the top corner. A centre-half putting a free-kick in the top corner. I just remember thinking: ‘This guy is unbelievable,’ and obviously he went on to Southampton, Liverpool and the rest is history.

What made him so hard to play against for me was not just his physicality but he was three steps ahead every time. If you made a run, he was already there. If you went for a header, he’d have read it. Celtic were a good side so I didn’t see that much of the ball anyway, but you could see his quality on it. He had a bit of everything and you could tell he was going to go on to bigger and better things. 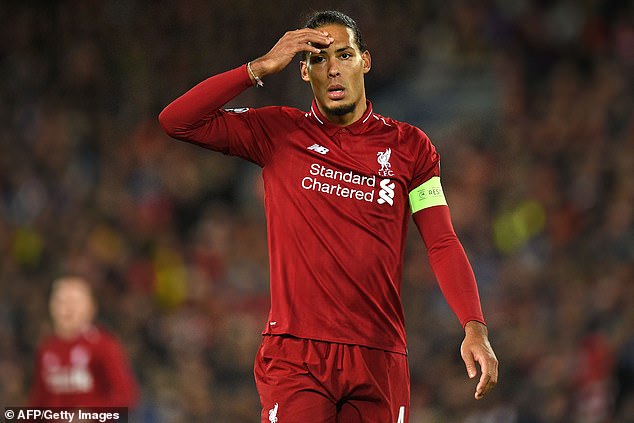 Most embarrassing moment in football?

Probably getting relegated that season with Hibs. I’ve had four promotions, but I’ve been relegated as well. I was only up in Scotland a year. Then I came back to Shrewsbury for my second spell and we got promoted again (in 2014-15). That softened the blow for me, but you still feel bad that you’ve left a club after they’ve gone down.

I wanted to do well up there as well. I was signed for a fee (£200,000 in July 2013) and not many players sign for fees in Scotland unless you’re going to Rangers or Celtic. I had big boots to fill as well. Leigh Griffiths was the top goalscorer for Hibs the season before. It’s a bit of a regret of mine not doing well up there and it was definitely the worst feeling and most embarrassing moment of my career getting relegated. I wouldn’t wish that on anyone.

We finished second from bottom and had to play Hamilton, the Championship play-off winners, home and away in a play-off. They beat us over two legs, so they got promoted and we got relegated.

That feeling definitely drove me on personally. I remember driving back home for the summer, that long journey home down the M6, thinking: ‘I never want this feeling ever again.’ Fortunately, I’ve had three more promotions since then so maybe for me it was a reality check and a good thing. For other people, I don’t know, but I never wanted to let anyone down again like I had.

Which song gets you in the mood for a match?

I’m a fan of all types, but I like older music so what gets me in the mood is a bit of Elton John or Al Green. I’ll listen to The Beautiful South in the car or Lighthouse Family.

In the dressing room, we have a mix – a bit of R ‘n’ B, a bit of house. I like to stay in touch with everything. 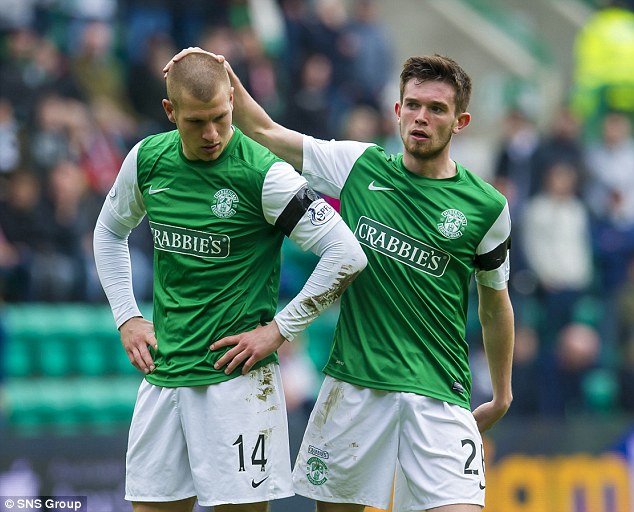 I’m quite a clean eater. I like my diet and looking after myself, but if it was anything, I do like a bit of chocolate. My problem is, and the reason why I don’t have it often, is that once I do start, I don’t stop. I can’t just have one square. The whole bar or the whole packet is gone. That’s why I don’t do it very often. If I had to choose, I’d say Fruit and Nut. Asda do a brilliant one, their own Fruit and Nut with a cup of tea, you can’t beat that. Asda are more than welcome to send me some if they see this.

Which player in history would you like to play alongside – and why?

Alan Shearer. He was my hero growing up. I loved watching him play. I loved all his goals. He could score with his left foot, right foot, head, anything. He was similar to me in a way. Obviously he was miles better than I’ll ever be, but the way he played was quite similar to the way I play. When you’re a kid, you want to be a flair player like Thierry Henry, but I just fell into my style and I knew how I was going to be. So I just watched Alan Shearer.

People maybe won’t agree maybe but for me, he’s the best striker to play in the Premier League. He’s the highest scorer in Premier League history and goals are what strikers are judged on.

He was phenomenal and I’m trying to get (Luton teammate) Elliot Lee to get me an autograph or a little meet, just a little handshake, anything. His dad (Shearer’s former Newcastle teammate, Rob Lee) is quite close to him.

I don’t know how I’d play alongside him. I’d have to try and get a penalty off him every now and then.

Which famous manager would you have loved to play for – and why?

I’ll say Martin O’Neill because I came through the ranks at Villa. Martin O’Neill was the manager at the time. I was only a youth player and a reserve player, but I could see the way he went about things and the dressing room he had. He had such an aura about him. He didn’t say much. He was very quiet but a really intelligent bloke.

I never made a first team appearance for Villa but I wish I had and that’s largely because of him. I’d love to have played under him because of the way he got results out of the lads. He got them into the top six and Europe one season. They had a great side and the players who played for him all loved him. He had a great backroom staff as well, John Robertson and Steve Walford. I think they’re with him with Ireland now.

The other James Collins, the one who was at West Ham last season, was at Villa at the same time as me. A lot of people called him ‘Ginge’ but on teamsheets to distinguish between us, it meant that I had to be put down as James Collins Jnr. He was a top man, though, and we had a laugh about it. I was only in the youth team and reserves so we didn’t cross paths too much. 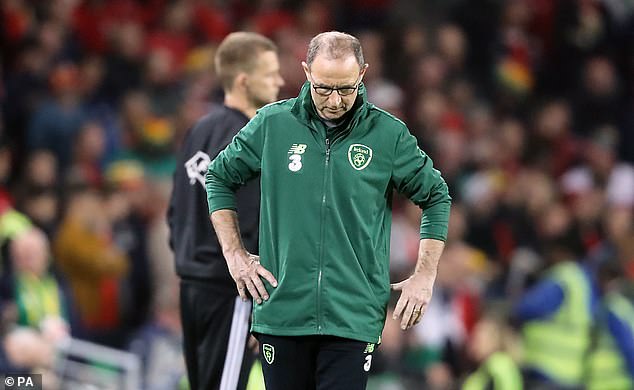 What would you be if you weren’t a footballer?

When I was younger before I started taking football seriously, I always wanted to be a fireman. I used to love the thought of being a fireman. Funnily enough my son loves Fireman Sam and dressing up as a fireman, so he’s similar to me.

I always liked it because you help people, it keeps you fit and obviously I loved the idea of going around in the fire truck. You never know, I could do it when I retire.

Tell us a secret that fans won’t know…

I’m from Coventry and I was at Coventry City when I was 10. In the Under-11s at the Coventry academy, but then I got released in the Under12s by a guy called Brian Burrows. He used to play for Coventry, but he was the Academy Director at the time. The next year I went on to Villa in the Under-13s and stayed there until I was 21.

I found that quite surreal, but he wouldn’t remember me, so I actually didn’t mention it to him. I probably will eventually, but he’s just passed me on my Level 2 coaching course so he’s back in my good books. And who knows, being released was a bit of a reality check at the time, so maybe it’s all down to him.

Sky Bet are the proud title sponsors of the EFL. For a wide range of markets and price boosts across EFL matches visit skybet.com