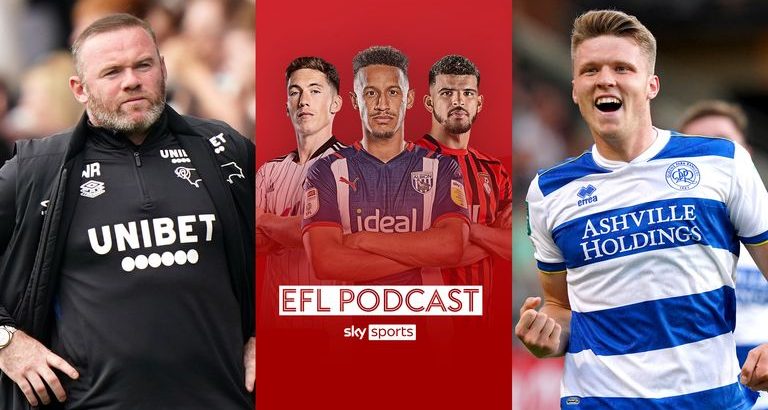 Jonathan Oakes is joined by pundit Don Goodman and commentator David Stowell to discuss all the latest from the Championship, League One and League Two.

Championship part 1 (from the start of the show)

The panel look back at the live games from the weekend, after Swansea drew with Sheffield United and Peterborough came back late on to beat Derby County on Saturday.

There was a thumping victory for Fulham at Huddersfield, as they ran out 5-1 winners at the John Smith’s Stadium, while West Brom got their first win in the Championship under Valerien Ismael, beating Luton 3-2.

QPR underlined their status as dark horses for the play-offs this season with a 3-0 victory at Hull City, and we hear from fan Charlie Wise from the Talking Rangers podcast on their potential promotion credentials.

Neil Warnock steered Middlesbrough to a 2-1 win over Bristol City, with both goals coming from new signings in Uche Ikpeazu and Matt Crooks.

There was frustration at Birmingham as issues with the stands at St Andrew’s meant they could not have a full house in their first home game since the return of fans, with Tom Oxland from the Blues Focus podcast filling us in on the latest views from their support on that situation.

We then hear from Peterborough striker Jack Marriott in the latest edition of Ten To Tackle, as he answers our quickfire questions on his career so far.

It has been a stellar start to the season in League One, and the panel reflect on Burton’s success under Jimmy Floyd Hasselbaink, as they began the season with two wins on the bounce.

There was a return to Plough Lane at last for the fans of AFC Wimbledon, with Charlie Talbot from The Dons Trust describing his emotions during the occasion as they battled to a comeback draw with Bolton.

Elsewhere, MK Dons were beaten 2-1 at home by Sunderland in the first game in charge for Liam Manning since he replaced Russell Martin.

In League Two there was a first win for new Bradford boss Derek Adams as they beat Oldham 2-1.

The panel also look back at another win for Northampton, and the struggles of Bristol Rovers under Joey Barton. Fan Caz May from Her Game Too joins to assess the problems that have blighted the club.

Elsewhere, there was a win for Carlisle after a 10-hour coach trip to Swindon, although there is plenty of positivity in the air for the Robins after the signing of Jonny Williams.