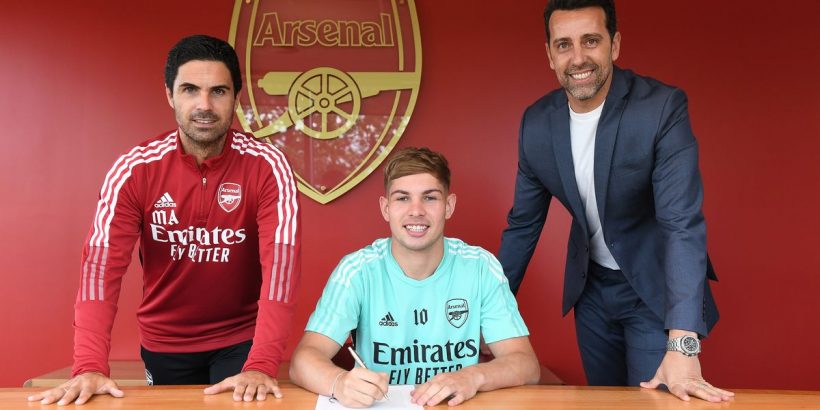 Emile Smith Rowe has put pen-to-paper on a contract extension with Arsenal, and bagged himself a new shirt number just weeks after Aston Villa saw their approach denied by the Gunners.

Smith Rowe impressed for Huddersfield before getting his shot at the Gunners, and he has drawn plaudits during his 20 appearances last campaign for Mikel Arteta's side.

Aston Villa were interested in his services, and they twice made approaches for the England U21 international, which were both rebuffed by Arsenal.

And he has put any doubt about his future to bed, by signing a new long-term contact and taking the coveted No.10 shirt.

Arsenal's technical director Edu said: "This is another important step forward for us and we’re all delighted that Emile has signed a new long-term contract.

"It’s great to see another young player develop through our academy system to become a key part of our first team.

"Emile is a player who represents the future of the Club and this is why we have given him the number 10 shirt.

"We have trust in Emile and we know he has the potential to be a beautiful player for many years to come."

Arteta added: "As we all saw last season, Emile is an intelligent player with excellent ability.

"His sharpness on the turn and exceptional vision have already made him a key player for us. His attitude and willingness to learn have also been very impressive.

"Huge credit to our team in our academy who have given Emile a great education and have worked superbly to help with his development through the age groups."

He continued: "I know the fans will join us in being delighted that Emile has committed his future to the Club.

"We’re now looking forward to helping him develop further and seeing him become even more important to the strong young team we’re building."

We'll be bringing you the very latest updates, pictures and video on this breaking news story as it unfolds.
For all the latest news, make sure you visit: dailystar.co.uk/sport/football

And you can stay up to date with all the must-see headlines, pictures, analysis, opinion and video on the stories that matter to you.