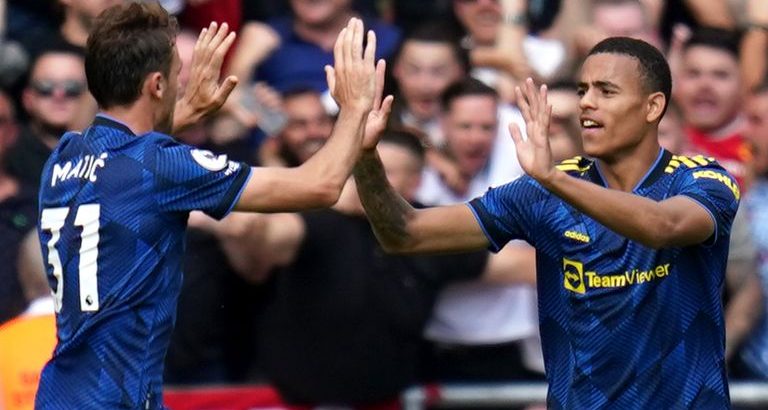 Match report and free highlights as Man Utd fail to capitalise on Mason Greenwood equaliser after Fred own goal; United equal Arsenal Invincibles’ 27-game unbeaten away record but Ole Gunnar Solskjaer’s side left wondering what might have been

Southampton repelled a second-half Manchester United fightback to claim their first point of the season with a battling 1-1 draw at St Mary’s on Super Sunday.

United trailed Saints at half-time for the second successive season after a Che Adams strike had gone in via a deflection off Fred.

Mason Greenwood equalised nine minutes after the break and, having surrendered a two-goal lead in last season’s 3-2 defeat to United, the writing looked on the wall for Southampton in the face of sustained pressure from Ole Gunnar Solskjaer’s free-flowing side.

But a spirited late surge saw Southampton finish the stronger of the two sides and create the best chance to win the game, with Adam Armstrong denied the winner on his home Saints debut by a stunning late David de Gea save.

The draw sees United equal the Premier League’s unbeaten away record of 27 games – set by Arsenal’s Invincibles – and lifts Ole Gunnar Solskjaer’s side up to fourth in the table, while Southampton climb to 13th after getting their first point on the board.

Man of the match: Tino Livramento.

An encouraging Southampton start included captain James Ward-Prowse trying to catch De Gea out with a long-range, near-post free-kick, but then came an early spell of United dominance in which the visitors should have taken the lead.

United were denied by the frame of the goal and last-ditch defending on seven minutes when Paul Pogba managed to hook Bruno Fernandes’ free-kick onto the bar, before Anthony Martial’s follow-up header was cleared off the line Mohammed Salisu.

Centre-back Salisu was in the right place at the right time moments later to prevent Pogba’s close-range drive from finding the target, and Pogba soon saw another opportunity pass him by when he sent a free header from Luke Shaw’s free-kick over the bar.

But Southampton escaped the United storm unscathed, grew in ascendancy and then took the lead in contentious circumstances on the half-hour mark.

Defender Jack Stephens dispossessed Fernandes, shifted the ball inside where Moussa Djenepo and Armstrong combined to find Adams, whose shot off target took a wicked deflection off Fred on its way past a helpless De Gea. 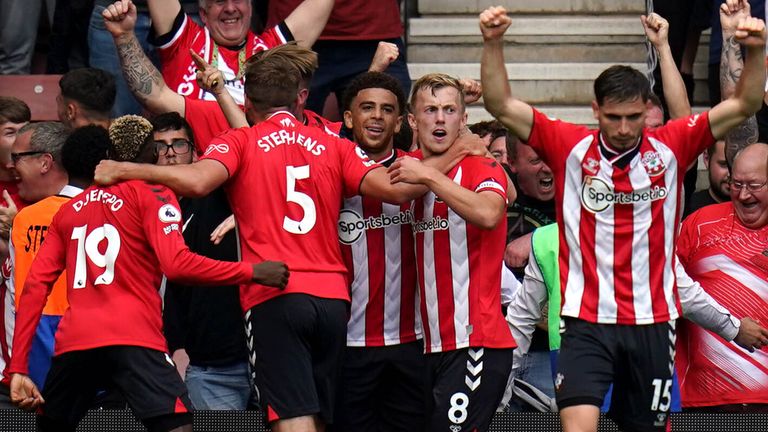 Despite complaining bitterly and unsuccessfully about Stephens’ potential foul on Fernandes, United found themselves needing to come from behind at St Mary’s for the second successive season.

United continued to have joy from set pieces before the half was up, with Shaw’s corner finding the head of Nemanja Matic, but his downward header produced an excellent save from Saints goalkeeper Alex McCarthy as the hosts went into the break in the lead.

Hasenhuttl replaced Theo Walcott with Jan Bednarek at the break but United continued to expose Southampton’s defensive frailties. Pogba saw strong appeals for a penalty turned down after his volley was adjudged to have struck the body of Salisu and not his arm but, within nine minutes of the restart, the visitors were level. 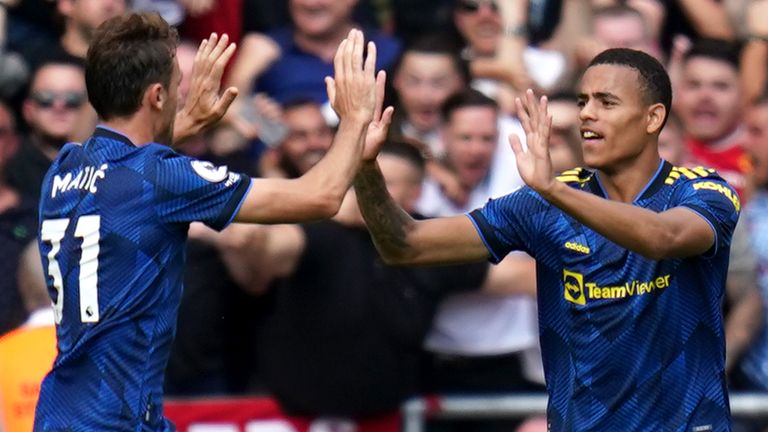 Fernandes and Pogba combined brilliantly at close quarters in the Southampton area before the Frenchman rolled the ball into the path of Greenwood, whose scuffed effort found its way through the legs of McCarthy.

The introduction of Jadon Sancho shortly before the hour only intensified the one-way traffic in United’s favour and, having set up Greenwood’s equaliser, Pogba nearly got on the scoresheet himself, dropping his shoulder to escape the Saints defence before firing a shot inches wide.

Greenwood sent a free header over the bar as United ratcheted up the pressure, with Fernandes forcing McCarthy into action with a near-post header of his own, but just as it seemed the visitors would power on to victory, Southampton found their second wind and should have won the game themselves.

Ward-Prowse dispossessed Maguire as Adams threaded Armstrong through on goal but, with just De Gea to beat, his shot was brilliantly read by the United goalkeeper. Adams’ near-post flick looked to have set up Armstrong again moments later, but Saints’ summer signing got caught in two minds and fluffed his header with the goal at his mercy as the spoils were shared. 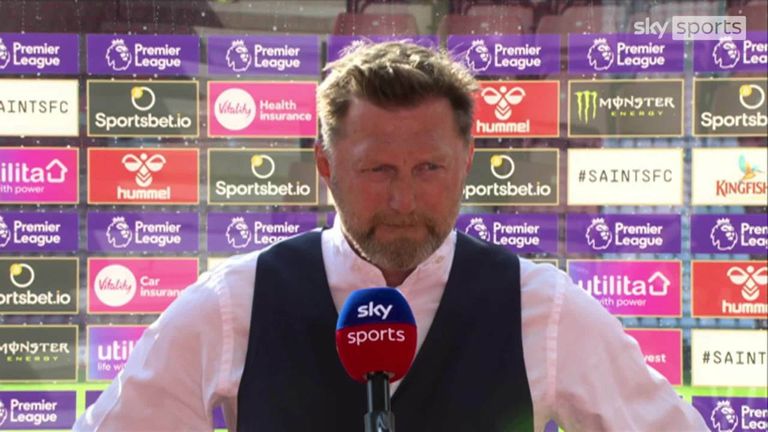 Southampton manager Ralph Hasenhuttl: “This was a big step forward for us, and important to be competitive. It’s a pity (not to win), we had a few good chances to win the game today. But it was also a fantastic performance from us.

“We changed the shape completely at half-time. We had the chance to win today, but the important thing was the first point of the season, and an absolutely deserved one I think.” 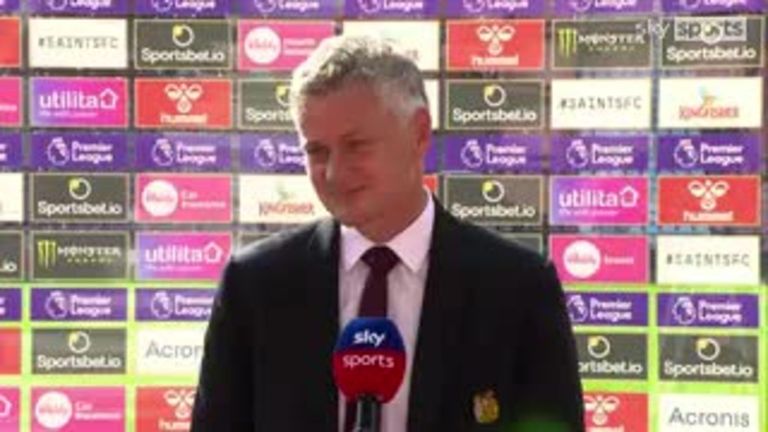 Man Utd manager Ole Gunnar Solskjaer: “We did well to get the goal, a good goal, having built pressure. We had another good spell for five or six minutes then lost our way a little bit.

“Maybe tiredness and sloppiness came in and we gave their crowd things to cheer about, they had some counter-attacks and a few dangerous moments. The whole team fell away a little bit and we didn’t play particularly well in the last 15 minutes.”

On Southampton’s goal: “We should do better, if you don’t get a foul you have to make sure you block the shot, put your body on the line and make sure they don’t put a shot on target. That being said, it’s a foul.

“He [Stephens] goes straight through Bruno, his hip and arm come across him. I’m not worried but we have to look at it because we cannot go from one extreme, like basketball last season, into rugby now. I like the more lenient interpretation, it’s more like men’s football, but that is a clear foul.”

Man of the Match – Tino Livramento

Southampton travel to Newport in the second round of the Carabao Cup on Wednesday at 7.45pm, and then head to Newcastle in the Premier League on Saturday at 3pm. Manchester United travel to Wolves on Super Sunday at 4.30pm – live on Sky Sports Premier League.