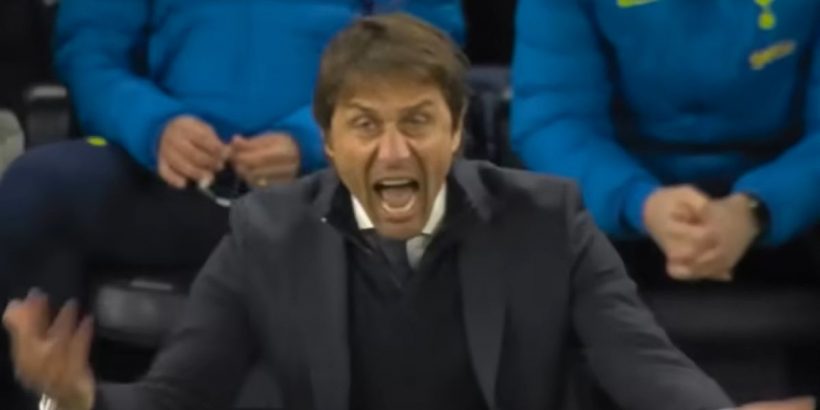 Tottenham boss Antonio Conte has been told to reel in his passionate touchline antics after his side’s embarrassing defeat to Slovenian minnows NS Mura on Thursday.

But they were humiliated by Mura, with goals from Tomi Horvat and Amadej Marosa securing their first win of the group stages and leaving Spurs at risk of crashing out before the knockout stages.

Conte was typically passionate on the sidelines, unable to hide his frustrations at the underperforming team he took over from Nuno Espirito Santo.

His antics on the touchline have become part of his identity at every club he has managed and he was particularly fired up following Sunday’s defeat of Leeds.

That was the Italian’s first Premier League win as Spurs boss, with Conte turning to face the crowd and throwing his arms up in delight.

But former Tottenham star Alan Brazil believes Conte needs to reign in his antics after his side were embarrassed in Slovenia.

“I don’t like the way he’s play acting to the crowd. I don’t like it Ray. When there’s a near miss, he’s like ‘argghhh’ and he’s holding his head and like ‘come on, come on’,” he told talkSPORT.

Can Antonio Conte turn things around at Tottenham? Let us know in the comments section…

Spurs now sit second in their group, with a trip to leaders Rennes their final game before the knockout stages.

If they don’t win that game, they will be relying on Mura to defeat Vitesse Arnhem or they will be eliminated from the competition.

Even if they win in France, they will not be able to overtake Les Rouge et Noir and so will take on one of the eight Europa League runners up in a preliminary knockout round.