“He’s scored three goals this year from within a yard. Now there’s a knack in itself!”

Steve Bruce believes Callum Wilson has something special: that inbuilt ability possessed only by natural strikers.

Speaking to the Pitch to Post Preview Podcast, the Newcastle boss made it clear how pleased he has been with the impact his £20m summer signing from Bournemouth has had.

With six goals in his first seven Premier League appearances it is no surprise Bruce is happy with Wilson’s return so far. Those goals have accounted for six of Newcastle’s 11 points, helping them to their best start to a Premier League season in nine years.

“He’s tapped in against Burnley, he’s had a tap-in against West Ham and he certainly had that at the weekend as well,” said Bruce, reflecting on Wilson’s eventual clincher against Everton, after he had earlier scored a penalty.

“It just goes to show that a goalscorer is something which is in you. You can’t really coach that; being in the right place at the right time is that unique knack and that’s why he’s made such a difference to us.”

Wilson is a player Bruce has been keen to work with for some time and the England international has all the attributes the Magpies boss likes to have in a frontman.

“I first became aware of Callum when he was at Coventry a long time ago and you monitor somebody when he bursts onto the scene,” Bruce said. “He gets his move and does particularly well for Bournemouth. Every time you play against him you know that first and foremost he’s a real top, top lad. He’s a good character, a good type and of course when you do analyse it, he’s quick, he’s big, he’s strong and he can score a goal.

“So when you put all of those ingredients together, then that’s what we’re looking for, someone who gives us that option, which every team likes to have.”

A question of balance

Wilson’s sharp finishing has been particularly useful to Newcastle this season given the fact they have had the joint-fewest shots on target in the Premier League. In fact, remarkably, they have found the net 10 times from just 18 shots on target.

Combine that with the fact Newcastle have faced 117 shots, 13 more than any other side, and inevitably, there has been criticism about the manner of the team’s performances.

Bruce is aware of that feeling and insists he too is looking to play a more expansive brand of football – but warns there must also be a realism and balance to how adventurous teams can be in the Premier League, given the quality possessed by other sides.

“We’ve been saying that now for the best part of 15 months since I’ve been here: to try to get that balance right,” he said.

“With Callum, he certainly gives you a cutting edge at the top end of the pitch but what we were doing earlier in the season, we were conceding too many goals and giving too much away.

“The Chelseas and Tottenhams and Man Citys of this world are beating the top teams in Europe by five and six every week.

“So this is what you have to play against and you have to make sure you get the balance right if you possibly can.”

Friday’s opponents Southampton are another example of how dangerous Premier League sides can be, having scored four in their win over Aston Villa last weekend.

They will be without injured striker Danny Ings – “I’m delighted it’s not too serious, he deserves a bit of luck,” says Bruce – and in the absence of Saints’ top scorer, Newcastle have the opportunity to make it back-to-back wins going into the international break. 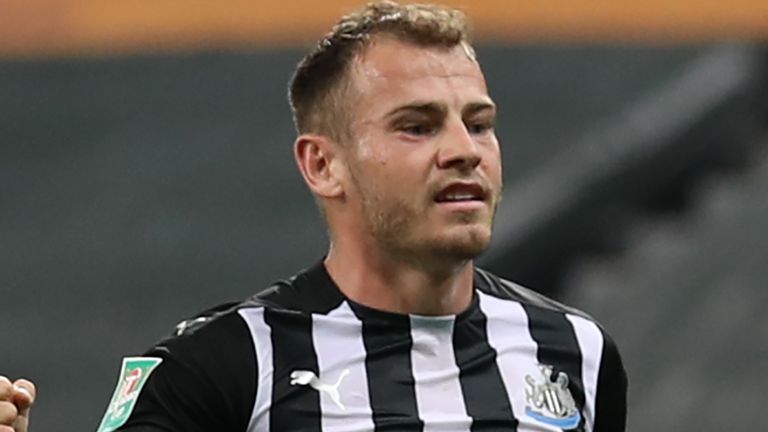 That would temporarily lift them up to fourth in the table, and while Bruce will not get swayed by positions in the early-season standings, he is quietly confident in the way his team are progressing.

“We brought in four outfield players [in the summer] which equates to a quarter of the team, near enough, so it always takes time,” said Bruce. “But the more better players you’ve got, we’ve now got the ability to change it at the top end of the pitch. Maybe we didn’t have that last year, enough.

“So the squad is certainly better, which helps myself and the team. It takes a bit of time. Quietly we’re nudging along.

“We’re not going to get too carried away because we’ve had a decent result but if we can get the result at Southampton it will have been a decent start to the season, which was always going to be difficult when you look at the teams we’ve played.”

Jamie Carragher and Steve Bruce are among the guests on this week’s Pitch to Post Preview Podcast.

Sky Sports pundit Carragher joins Peter Smith and Adam Bate to look ahead to the big Super Sunday clash between Man City and Liverpool, while Steve Bruce is on the line to discuss Newcastle’s Friday Night Football trip to Southampton and the form of star striker Callum Wilson.

Also on the show we analyse how Chelsea have turned around their defensive problems, how Leicester have coped with injury problems, and Adam makes a bold Pitch.