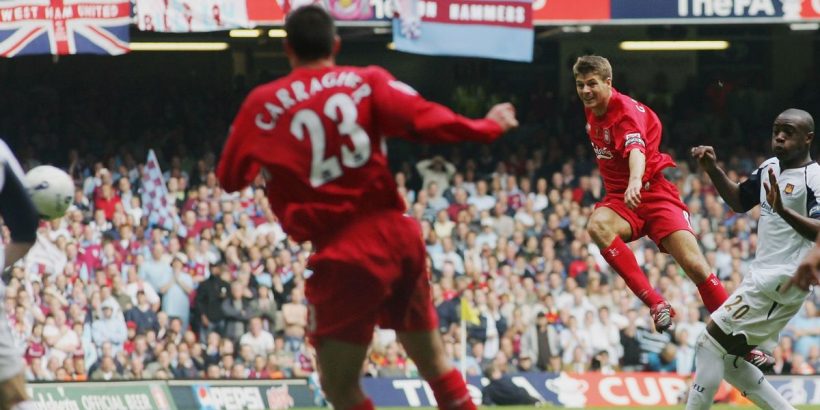 There was a problem, however, the ball had fallen to Steven Gerrard, and he was in Gerrard range.

The Englishman, who had been on the floor suffering from cramp only moments earlier, pulled his right leg back, and he let fly.

The 2006 FA Cup final can stake a claim to be the greatest of all time, and Gerrard's one-man mission to haul the title back to Merseyside has since gone down in Liverpudlian folk-law.

However, before its dramatic finale, West Ham had taken the lead through a Jamie Carragher own goal; six minutes later, the Hammers were two goals to the good.

With the title slipping through Liverpool's fingers, Gerrard took the game by the scruff-of-the-neck.

Gerrard was unplayable: he controlled the ball with a scorpion kick; he was bamboozling defenders with fancy flicks, and he was untouchable in the centre of the park.

He provided Djibril Cisse with an assist before volleying Liverpool onto level terms just past the break.

However, when West Ham captured a freakish third, they must have thought they'd done enough.

That was until Gerrard's 30-yard-screamer flew past a hapless Shaka Hislop: to take the game into extra time.

The Red's wrapped the game up on penalties; Dietmar Hamann, Gerrard and John Arne Riise were all on target for Liverpool.

"[On this day] Gerrard put one of his greatest ever performances, assisting once and scoring twice," one fan tweeted.

"This Gerrard's best-ever performance in a Redshirt. In Istanbul, everyone was run ragged first half, but he was pitch-perfect here from the first minute to the last.

"He gets compared to other midfielders but he dragged this team to victory on his own. That's the difference," a Liverpool fan page tweeted.

Liverpool fans have never forgotten Gerrard's performance that day, and one fan even remarked he wishes he was still in the team now.

"What a player. What a performance. Captain Fantastic!! Every match we went into, I had confidence we'd win just because we had Stevie! Oh, how we miss a Gerrard in our team now…"

That was Liverpool's 7th FA Cup victory, and whilst – at the time – Gerrard would have been hoping for more silverware coming his way, as a Liverpool player he only experienced victory on one more occasion.

But Gerrard will always have that day in Cardiff, and that evening in Istanbul.