An own goal from Stoke captain James Chester earned struggling Nottingham Forest an important Championship point from a 1-1 draw on a misty night at the Bet365 Stadium.

Jordan Thompson curled the hosts in front from a corner in the first period, but his effort was cancelled out in the second half when Chester turned through his own net.

Forest had the better of the late chances but were wasteful in front of goal, with the sides sharing the spoils.

Both sides had won just one of their last five games with the Potters knowing a win could take them back into the play-off places. 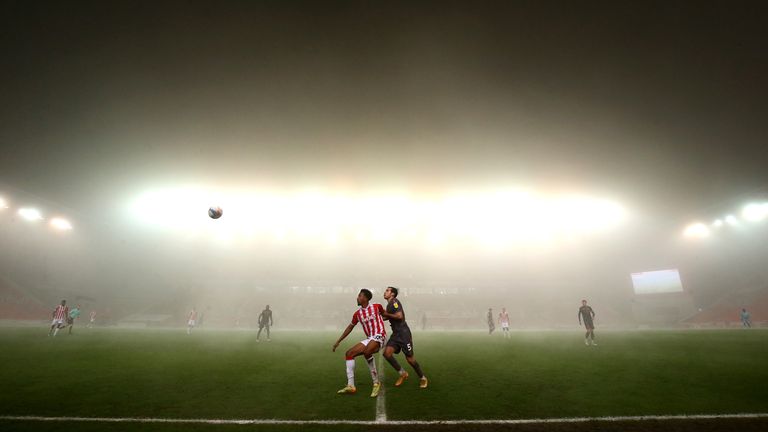 It was the lowly visitors who started the brighter as Joe Worrall glanced a corner wide on the 15-minute mark.

That sparked Stoke into life as the returning Sam Vokes saw an effort turned behind by goalkeeper Brice Samba, before the home side were gifted the lead thanks to a bizarre goal.

Thompson’s inswinging corner was not attacked by Lewis Grabban on the near post, with the ball hitting Samba and nestling in the net to the bemusement of the Forest defenders.

Both sides were stringing some good moves together at points in the first period, but the attackers did little to trouble the respective goalkeepers in the opening 45 minutes.

Joe Allen, who was making his first start of the campaign, lashed an effort over the crossbar after 52 minutes, but the first big chance of the half fell to the visitors.

Stoke failed to properly clear a corner and Anthony Knockaert’s inviting cross was met by the head of Stoke skipper Chester, who put into his own net.

Thick fog then dropped on the Bet365 Stadium with 20 minutes remaining but – despite the difficult visibility – both sides were going in search of a winner.

Substitute Lyle Taylor spurned a chance 10 minutes from time, when he turned over a Joe Lolley cross, before Michael O’Neill’s side had Bursik to thank for earning them a point at the death.

John Obi Mikel’s stray pass allowed Cafu to go one-on-one with the goalkeeper, but the England U21 international did enough to thwart the Forest man.

Stoke’s Michael O’Neill: “I thought we were very good in the first half and had control of the game. In the second half it descended into a bit of a lottery really with the conditions, but it was no doubt Forest had the best of the second half. They were handed opportunities from our poor decisions but, in defence of the players, the conditions were very, very difficult and on the face of it a draw was a fair result.

“Late on the keeper made a great save as Jon (Obi Mikel) played a blind pass and he couldn’t see the lad. The colour of their shirts and the conditions made it difficult. We took a deserved but fortunate lead and I thought we played well. I thought their substitutions maybe upset our rhythm a bit. In an ideal scenario I wouldn’t have taken off Joe Allen but it was unrealistic to expect him to play 90 minutes.”

Nottingham Forest’s Chris Hughton: “Again, we should have won the game really after conceding such a poor goal in the first half. I think we got a really good reaction from the side. It look a little while but it opened up to suit us as such and once it did, we got going and only one team looked like going on to win against a really good side.

“I must admit they were a threat, they had chances as well. Cafu had the best chance of the game and we had players who got into really good areas such as Anthony Knockaert and Joe Lolley. When you come here and go 1-0 down so early you need a reaction and we got that and we were going on to get the win. We deserved three points and to turn draws into wins, we need that little bit of luck to fall for us.”