Ten-man Norwich survived a spirited Stoke comeback to triumph 3-2 and stay top of the Championship.

Finland striker Teemu Pukki scored twice and Argentine midfielder Emi Buendia was also on the scoresheet as it looked like the Canaries were cantering to victory.

But Buendia was sent off for a second yellow card with 21 minutes remaining and his dismissal provided a lifeline for the Potters to fight their way back into an absorbing contest. 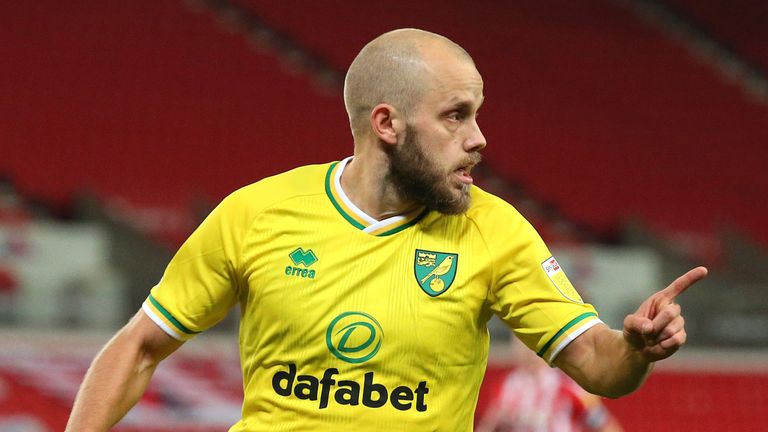 However, the Canaries withstood late pressure at the death to cling on for their first away win against the Potters for seven years.

Buendia put the visitors ahead in the 18th minute with a clinical finish and nine minutes later Pukki netted with a fine left-foot volley.

Pukki rounded ‘keeper Joe Bursik just before the hour mark with his seventh league goal of the campaign, a goal which looked to have sealed the deal.

But there was more drama to come after Buendia’s dismissal, which saw Campbell head in his fourth league goal in three games and Collins nod in skipper Sam Clucas’ corner to set-up a frantic finish.

Midfielder Josh Martin saw his right-foot shot deflected over the bar as the Canaries countered well and then Tottenham loanee Oliver Skipp had a strike deflected wide as Farke’s side ramped up the pressure.

At the other end, Campbell teed up Clucas but the skipper curled his left-foot shot just over.

But then the Canaries took the lead when Buendia rolled a shot into the bottom right corner.

Midfielder John Mikel volleyed wide as the hosts went within a whisker of restoring parity two minutes later but Pukki doubled the Canaries’ lead with his superb strike.

The Potters should have pulled a goal back after a trio of chances.

But Krul thwarted striker Steven Fletcher from point-blank range, Campbell had a shot charged down and then Powell headed the rebound against the woodwork.

Pukki netted his second but Campbell and Collins scored as the home side nearly completed a stunning comeback.