Sydney FC star Brandon O'Neill has played his final game for the club after sealing his long-awaited move abroad by signing with K-League giants Pohang Steelers.

The Sky Blues received an offer from Pohang last week, reached an agreement with the Korean club on Monday over an undisclosed transfer fee and announced the departure of O'Neill, who will travel to Pohang immediately to finalise his move. 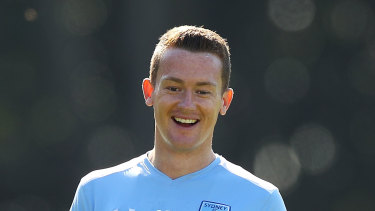 “Brandon has been immensely important to this club’s success over the last five years and I would like to thank him on behalf of everyone," Sydney FC coach Steve Corica said. "He is an excellent player and we will be sorry to see him go, but I understand he feels he has achieved everything he can here at Sydney FC, and is keen to test himself elsewhere. More than that, he is an excellent person who more than deserves this chance and we’ve agreed we won’t stand in his way.”

Brandon travelled to Korea on Monday to undergo his formal medical test before signing with Pohang and being unveiled as a new signing by the club.

“I love Sydney FC and I have loved every minute of my time here,” O'Neill said in a statement. "I have won two championships, two premierships, the FFA Cup and been named the club’s player of the year and for that I will be forever grateful."

“Now is the right time for me to accept a new challenge and to move out of my comfort zone again and to see what else I can accomplish. Our club is a fantastic place to be and I can only see more years of success with the talent in the playing squad. "