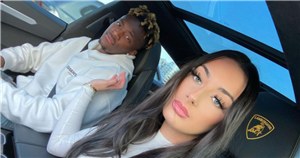 Tammy Abraham's girlfriend has deleted a rant she posted on social media after the Chelsea star was left out of the squad for the FA Cup final.

Abraham missed out on the clash with Leicester despite scoring four goals in this season's competition.

No player has scored more in the FA Cup this season though Abraham was not even named on the bench by Thomas Tuchel.

And his partner with the account leahmonroe_, who posted an image three weeks ago celebrating her anniversary with Abraham, was not happy.

A post which was swiftly deleted read: "How on earth do you make the decision to leave your top goal scorer out of the squad for a final?!

"The same person who even scored the goals to actually qualify for this competition? It's not making any sense to me whatsoever.

Abraham has played just 17 minutes of Premier League football since February, having struggled with an ankle injury.

He was not in the squad for the defeat to Arsenal in midweek with some suggesting he would feature in the FA Cup final.

And his absence at Wembley shocked pundit Ian Wright, who said: "I’m really surprised not to see Tammy Abraham in there being the top scorer for Chelsea in the competition, that he can’t even make the bench.

"But that [team] looks pretty strong to me."

While Tuchel previously said: "Everybody is concerned when they're not in the squad but it's never an easy decision for me to take.

"I have a lot of sympathy for him and I can understand that he is worried and sad and maybe angry with me when I make these decisions.

"Sometimes we spend almost an hour talking after the last training which decisions to take and which players we have to leave at home because it's thin margins which decide.

"Tammy has had this decision now a few times against him which is never personal but this is life at Chelsea sometimes as a player.

"I hope that he does not get lost in too many thoughts because he knows not to be too concerned about his situation."