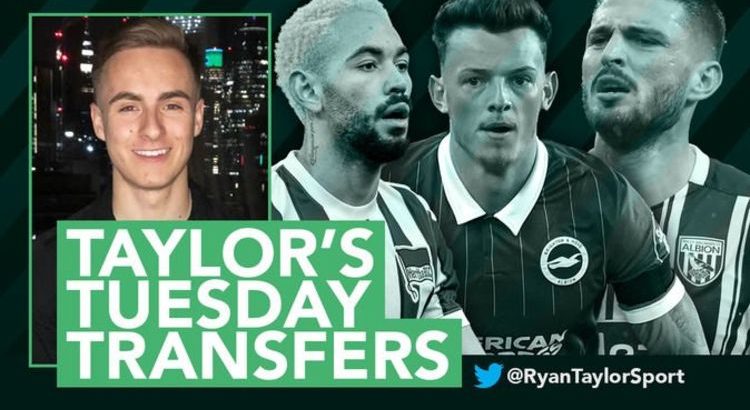 Expert: England can go one level up with penalty performance in Qatar

Welcome to the third instalment of my new transfer column: Taylor’s Tuesday Transfers that will be dropping every Tuesday at 9am on Express Sport, all summer. Every week, I’ll be speaking to people within the game to try and find out what’s going on at your club and chasing the stories that you want to read more about – before publishing it all in one place. This week, Arsenal, Leeds, Crystal Palace and West Brom all feature…

Arsenal will press on with a move for Ben White now the European Championships are over.

The Gunners want to sign the England defender who was part of Gareth Southgate’s squad at this summer’s tournament and have already seen two bids rebuffed by Brighton.

However, both parties believe the move will happen and Express Sport understands Arsenal are now looking to close the deal.

All formalities including a medical were never set to take place during Euro 2020 but now there are no obstacles in the way.

Brighton are holding out for £50million but Arsenal – currently offering £45m – will look to sweeten negotiations with bonuses and performance-related add-ons.

It’s understood that White would like his future resolved as soon as possible as he prepares to rest up ahead of the new season.

Transfer activity is expected to ramp up in the next few weeks following the completion of Euro 2020 and the Copa America as clubs prepare to get their squads in shape for the new season.

Most Premier League teams are now back in for pre-season, although some of their international players are set for an extended break and will not return to training for several weeks.

One agent – who does not wish to be named – whose client plays in the Premier League but could leave their club this summer, described talks with clubs during Euro 2020 as “a hornets’ nest.”

“You do not want to distract the player while they are focused on helping their country but our duty is to provide the best pathway for X next season,” they said.

“We need to listen to the clubs who are interested but sometimes their finances also hinge on selling first, particularly at the moment.

“There’s a lot of back and fourth and sometimes little progress but we cannot waste time, even if a transfer doesn’t happen.

“Sometimes you need to be firm in order to get what you desire.

“The current market is a little mad. There are loans, buy options, swap deals. You have to be open-minded to anything.

“I think we will see a lot of deals in the next few weeks.”

Express Sport understands the winger has been told he can leave Hertha this summer at the right price (£30m).

The player’s representatives held talks with Leeds sporting director Victor Orta but interest appears to have died since those discussions.

Atalanta are also interested in Cunha but should they decide to pay up, the deal is there to be done for Leeds…

Norwich are set to unveil the signing of Nice midfielder Pierre Lees-Melou.

The player jetted to England yesterday to undergo a medical after the Canaries agreed a deal worth around £5million.

Diagne and Yokuslu could return to England

The pair both impressed at The Hawthorns last season during loan spells from Galatasaray and Celta Vigo respectively.

The club would have liked to have kept both players had they preserved their top-flight status but they are now restricted with a Championship wage bill.

Not only that but new boss Valerien Ismael wants to put his own stamp on the squad.

Diagne is now back in Istanbul dusting off the cobwebs but he is almost certain to move on this summer.

Watford held discussions with his agent over a potential move before signing Joshua King instead.

Yokuslu could also return to England on loan with Crystal Palace amongst those credited with interest.

He loved his time in the Premier League and is expected to leave Celta before the start of the new campaign.

Crystal Palace have snapped up free-agent Remi Matthews to strengthen their goalkeeping department.

The Eagles have waved goodbye to Wayne Hennessey following the expiry of his contract and Jack Butland will step up to rival Vicente Guaita for the No 1 shirt.

Matthews made five appearances in League One last season with Sunderland.

We understand he was with Palace on Thursday to put the finishing touches on his move, which should be official shortly.