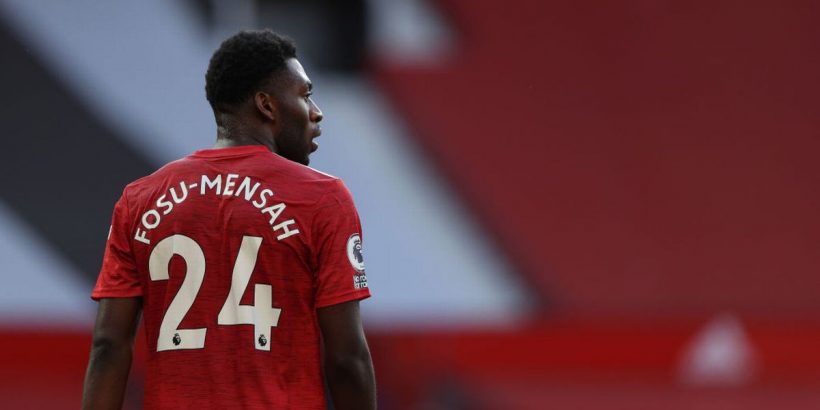 Timothy Fosu-Mensah’s Manchester United departure was hardly front page news by the time it was announced on Wednesday afternoon.

30 appearances in the last five years, tell a story of missed opportunities, cruel luck and a case of failing to live up to lofty expectations.

Plucked from the Ajax academy aged 14, there were high hopes for the versatile defensive player.

Fosu-Mensah was signed to schoolboy terms two years after that and his progression to the United first-team was completed in 2016.

As so many have before him, the Manchester United academy graduate was handed a chance to shine in the senior team. It was Louis van Gaal that handed his compatriot his big breakthrough, first bringing him off the bench against Arsenal, before starting him against Warford in March 2016.

And the 18-year-old made an instant impact, with his early displays leaving the legendary manager purring.

“Timothy has saved us three times I think because of his speed and I was very pleased he was on the pitch,” Van Gaal said, after making his first United start in 2016. “I let him stay on the pitch in the second half because we was the player who always closed the door for us.

“I think he is a better full back than a central defender but he is from origin at Ajax always playing right centre midfield or right centre half. This is his position.”

Van Gaal kept him around the first-team picture for the remainder of that season, with the expectation he could be given a bigger role in the upcoming campaign. Unfortunately for young Fosu-Mensah, Van Gaal was sacked that summer, with Jose Mourinho the man picked to succeed him.

The noises were right from Mourinho, he called him a player with “great potential” and promised he would have “plenty of opportunities” under his tutelage.

That didn’t quite materialise, with his only Premier League start coming on the final day of the season against Crystal Palace.

Desperate for more chances at the top level and just three weeks before his full Netherlands debut, Fosu-Mensah would move to Palace, in a bid to finally establish himself as a Premier League player.

It was another Dutchman, this time Frank de Boer, who saw something in him, instantly putting him into his starting XI at Selhurst Park. Of course, De Boer’s stint in south London has gone down in infamy, after he was sacked just five games into his tenure.

Roy Hodgson would replace him, leaving him to battle for a starting berth with now United defender Aaron Wan-Bissaka.

During his time away from the club, he admitted that he had kept in close contact with Mourinho, once again hinting at a potential for a run with his parent club.

“He's been texting but sometimes he rings,” he said. “Sometimes it is the assistant too. It's definitely good to have that contact because I'm still under contract there. “He's told me to just keep focusing on my game. We spoke and both came to the agreement that this is the best move for my development. He's said that we should keep talking to each other.”

But chances of at Old Trafford continued to elude him and he was loaned to Fulham ahead of the 2018/19 season.

But remarkably, for the third time in his fledgling career, a managerial change would halt his progress.

Initially a regular under Slavisa Jokanovic, his dismissal marked the end of that, with Claudio Ranieri opting to leave him out of the squad for much of the season.

Will Man Utd win the Premier League this season? Have your say here. Just when it finally looked like he could get a run, he suffered a horrific cruciate ligament injury that would see him sidelined until after the coronavirus suspension last season.

Ole Gunnar Solskjaer handed him limited chances, but the writing was on the wall when it was revealed he was free to speak to other clubs.

And so it’s on to Bayer Leverkusen for Fosu-Mensah, a club with European ambitions where, still only 23, he can finally realise his massive potential.

After a turbulent first-half decade in professional football, few would wish him anything other than great success.