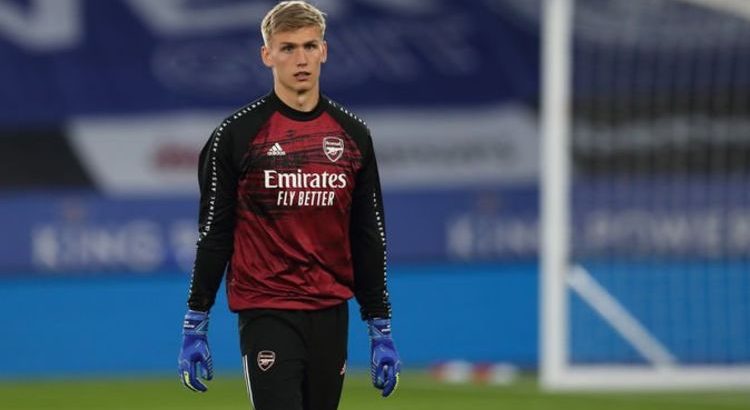 When Arsenal signed Alex Runarsson from French side Dijon last September, club chiefs were expecting him to last much longer than a year in north London. The Gunners had agreed a four-year deal for the keeper and had identified him as the perfect man to provide cover for Bernd Leno.

“We have been monitoring him for some time and, from the analysis, he has strong attributes that we look for in a goalkeeper and as a person.”

“I’m just extremely happy, extremely proud – it is a big day for me and my family,” Runarsson gushed after putting pen to paper.

“I can’t wait to get started. It is a huge club and obviously playing in the Premier League as well, it is a win-win situation.

“I know it is going to be a lot of hard work – but I am ready to do everything I can to get the most amount of minutes as possible.”

Boss Mikel Arteta proceeded to hand the keeper the number 13 jersey – and it has certainly proved to be unlucky for the Iceland international.

Runarsson’s stay in the capital has been a miserable one and his sole Premier League appearance came for the final 15 minutes of Arsenal’s defeat to Wolves in February after Leno had been sent off.

The 26-year-old had already been found wanting during a calamitous display against Manchester City in the Carabao Cup days before Christmas.

With Arsenal going toe-to-toe with the star-studded City at 1-1, Runarsson allowed a tame free-kick from Riyad Mahrez to squirm through his fingertips as the Gunners’ hopes of reaching the final went up in smoke.

Runarsson conceded seven goals in his six appearances for Arsenal and was clearly out of his depth against the top sides.

And the door to his Gunners career appears to have slammed shut.

The out-of-favour keeper has been shipped off on loan to Belgian side Oud-Heverlee Leuven and he is unlikely to play for Arsenal again this season.

The deal with Leuven reportedly doesn’t include an option to buy so Runarsson will return to the Emirates Stadium when the loan comes to an end.

But by that time it will almost certainly be too late for the shot-stopper to resurrect his Arsenal career.

This summer, Arteta has brought in Aaron Ramsdale from Sheffield United to compete for the number one spot.

And 19-year-old Arthur Okonkwo will become Arsenal’s third-choice keeper after being promoted to the first-team set up.

Meanwhile, Edu and Arteta will be left licking their wounds following another failed delve into the transfer market.