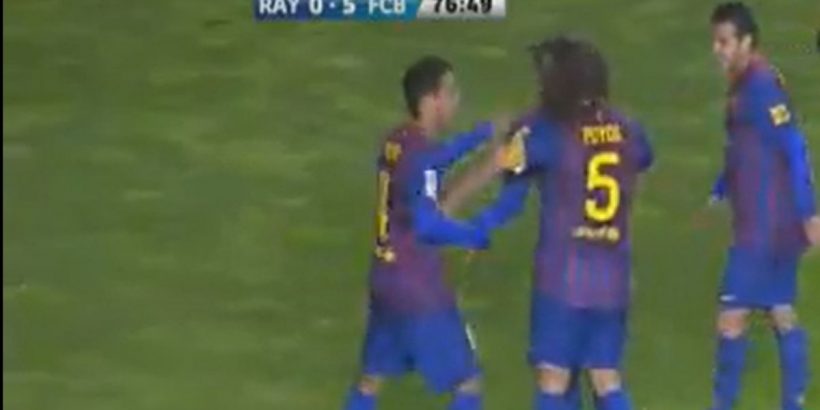 As Gary Neville recently remarked, Liverpool star Thiago Alcantara has been accustomed to "taking the p***" out of opponents, including Manchester United. But in his Barcelona days, those cheeky antics landed him in hot water with his team-mates.

Neville waxed lyrical through gritted teet h about the 31-year-old after watching the midfielder put on a passing masterclass at Anfield in the Reds' dominant 4-0 win over Man United earlier in April. The Spaniard was exceptional all over the park, effortlessly spraying passes from left to right and making a mockery of the United midfielders with neat touches and flicks.

Speaking on The Gary Neville Podcast, the former United defender – now a pundit for Sky Sports – claimed the Spaniard was taking pleasure from watching his rivals struggle to limit his influence. "Liverpool have toyed with Manchester United. Thiago was laughing when he came off, he was laughing at Manchester United all game," Neville said. "I don't normally swear on the podcast but he took the p*** out of Manchester United tonight."

While few would have a problem with how Thiago nonchalantly strutted his stuff around Anfield and generally enjoys his brand of football, his Barcelona team-mate Carles Puyol took issue with an act of disrespect from the midfielder a decade ago on April 29, 2012. Back then, Thiago was learning his craft under Pep Guardiola at Camp Nou and was on the fringes of the first team, behind Blaugrana legends Xavi, Sergio Busquets and Andres Iniesta.

So when he was handed an opportunity to impress against minnows Rayo Vallecano, the youngster took his chance with both hands. At the peak of their powers, Barca blew away most teams that dared to even try and replicate their brand of 'tiki-taka' football. Unfortunately, Rayo fell straight into the trap as the Catalan giants destroyed them with a scintillating display of football. Lionel Messi and Pedro each grabbed a brace as Alexis Sanchez, Seydou Keita and finally Thiago got in on the act of a 7-0 drubbing at Vallecas.

At 4-0 up, Barca were already cruising when Dani Alves floated in a teasing cross and Thiago of all people rose high to steer his header into the bottom corner. As he jogged towards Alves to celebrate, it appeared the pair had already rehearsed a dance routine to act out on the pitch in front of the furious Rayo fans.

HAVE YOUR SAY! Will Thiago help Liverpool win the Premier League title this season? Comment below.

Thiago and Alves swayed from side to side in unison as their team-mate Pedro watched on. But it appeared that not every Barca player was amused with the decision to gloat in front of the opposition when Puyol marched towards them and told the pair in no uncertain terms to stop what they were doing.

Knowing better than to tussle with the no-nonsense hardman at the back, Thiago sheepishly ceased his dancing and Alves followed suit as Barca returned to the centre circle, before Pedro and Messi each added their second goals of the night to compound their misery.

Liverpool fans won't have any problems with Thiago continuing his cocky streak providing he continues his current level of performance. And it seems that a decade on from his act of showmanship, the Spain star has learned that he can achieve the same level of frustration simply by being a world-class midfielder.