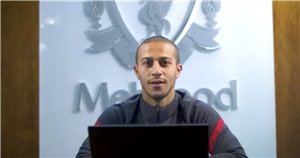 There was no room for any of his current Anfield teammates but that is not much of a surprise given Thiago has only been at the club for around four months.

As part of a #AskThiago Q&A on social media, Thiago was asked to pick his dream 5-a-side team and the Spanish international based it on players he has played alongside during his career.

He told Liverpoolfc.com : "I always say that more than the best players I always choose the best chemistry and the best friends I have in football.

"As well as myself – I think that’s the five-a-side I would choose. The only problem is that someone has to defend, but it’s okay!"

Thiago was also asked to choose which Liverpool legend he would rather play alongside out of Steven Gerrard and Xabi Alonso.

"Wow," Thiago responded. "Well, the midfield is so big, I can pick both. We can play with three midfielders.

"Xabi was a friend, a teammate and a teacher for me when we were playing together at Bayern and in the national team.

"I like him a lot and respect him a lot as a player, as a person and now as a coach. They were machines and amazing football players."