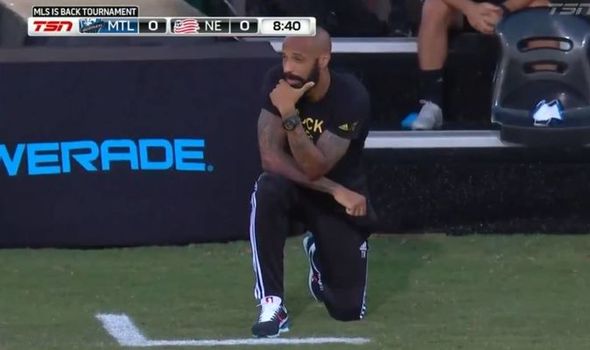 Thierry Henry made a powerful statement against racial injustice as he knelt for the first eight minutes and 46 seconds of Montreal Impact’s MLS game against the New England Revolution in memory of George Floyd. Henry, the Montreal head coach, wore a ‘Black Lives Matter’ t-shirt for the game.

Players and officials knelt in silence before the game in a message against racial injustice.

But Henry carried the message into the match, as he knelt for the first period of the game.

The former Arsenal and Barcelona striker, now the head coach for the Montreal Impact, kept kneeling and raised his fist in support for the Black Lives Matter movement. 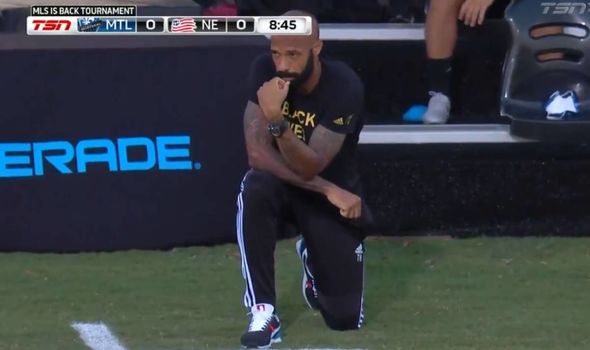 Floyd, an unarmed black man, died at the hands of the Minneapolis Police Department after an officer knelt on his kneck for eight minutes and 46 seconds.

And it was for that exact duration of time that Henry kept knelt during the game, before rising to his feet.

Before the match, players and officials knelt in solidarity with the Black Lives Matter movement, but Henry kept knelt after the game began, only standing once the eight minutes and 46 seconds were up.

His gesture was less than 24 hours after the first MLS game in the Orlando mini-tournament had featured a message from the MLS Black Players for Change group.

Before Inter Miami vs Orlando SC on Wednesday night, players took to the field for eight minutes and 46 seconds and raised their fists in silence.

Speaking in the build-up to the game, Henry had called for more to be done to fight instututionalised racism.

He referred back to his playing days, and said he was relieved to finally see other ethnicities getting involved in the fight against racism.

Henry explained that if he was suffering racial abuse during his time on the pitch, he would want others to stand up for him in the fight to stamp racism out of sport and society.

“We all have stories that we can tell, but for the first time other ethnicities are involved,” he said. 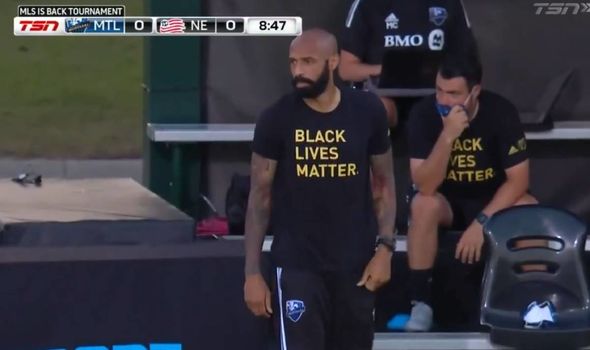 “I always say back in the day, when stuff like that was happening, that I get insulted on the field for the colour of my skin, I would like other ethnicities in my team to walk out before I walk out then that would be pretty powerful.

“Because at the end of the game, I don’t want the journalist to ask the question to the black guy.

“Ask the question to everybody and see if they feel our pain.

“That will have an impact.”