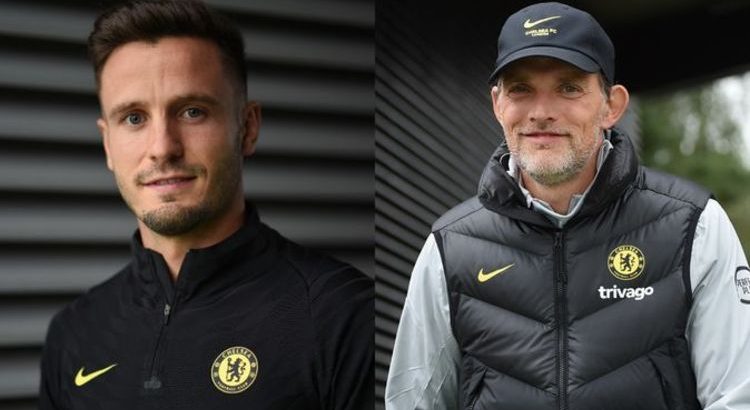 Thomas Tuchel reportedly promised Saul Niguez that he would only be used in midfield at Stamford Bridge, a stark contrast to his more recent days at Atletico Madrid where he was seen as a utility man by Diego Simeone. Chelsea finally landed their target after a tense deadline day standoff, although he will have to compete to earn a regular spot in Tuchel’s side.

With the deal going to the wire and beyond on deadline day, Saul’s move to Chelsea was one of the final transfers of an eventful summer window.

As headway was made in the nick of time, the Blues secured the Spaniard on an initial loan with a £30million option to buy at the end of the campaign.

His move also triggered a domino effect of activity in which Antoine Griezmann made a blockbuster return to Atletico, and Luuk De Jong replaced him at Barcelona.

On more than one occasion, it looked as though Saul’s move to west London would fall through.

He said: “My wife was very nervous. We have had some very complicated days because this decision is not easy. Leaving my home on a new adventure is complicated.”

Eventually, though, he did decide to take the leap of faith ahead of what is sure to be a crucial season in his career.

According to Goal, what changed the 26-year-old’s mind was an assurance by Tuchel that he would be used exclusively in midfield, where his old boss had shoehorned him into various positions.

The promise could be a blessing and a curse for Saul, with the Blues already boasting an extremely strong midfield contingent of N’Golo Kante, Jorginho and Mateo Kovacic.

Entry into multiple competitions and regular rotation means he will surely get chances, but it remains to be seen just how many chances a third or fourth choice option will get.

Having not turned out for the Spanish national team since 2019, now would be the perfect time to rediscover top gear as the World Cup looms in 2022.

The former Atletico man added: “The three midfielders who are playing are at a high level. It will not be easy to play, but if I put my mind to it and fight it, I can get it.”

Saul may have to do just that if he is to convince Chelsea to activate his option to buy at the end of the season.

Transfer chief Marina Granovskaia is bound to keep one eye on their long-term targets, with Declan Rice and Aurelien Tchouameni set to bank further experience over the coming year.

Although it has been a relatively quiet couple of seasons for the Spaniard, he certainly has the pedigree advantage on both of those options, he merely needs to translate that onto the pitch.

With Chelsea back in action against Aston Villa on Saturday afternoon, a rested Saul could waste no time in making his desired impact.