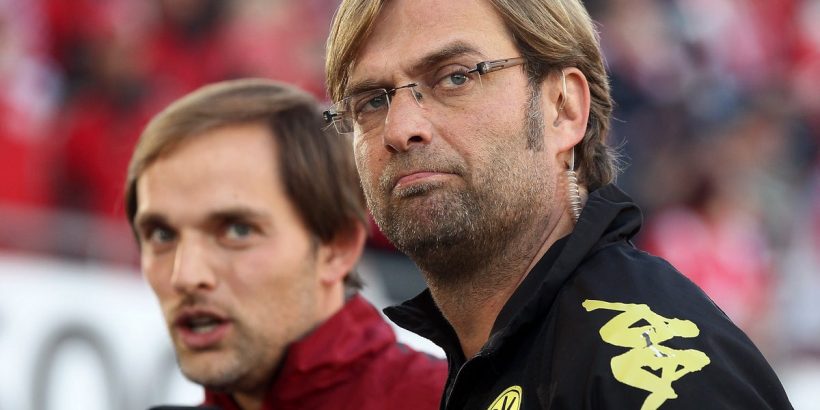 “Thomas Tuchel’s biggest problem at Borussia Dortmund was he was not Jurgen Klopp,” a Germany legend offered during an off-the-record conversation to paint part of the backdrop for a book last year.

“It was the same problem he had at Mainz. And in our country, people will tell you taking PSG to a Champions League final is not equal to taking Dortmund there or Liverpool two times in two years.

“Even in Paris, Tuchel was in Klopp’s shadow.”

There is noise in this industry that is easy for the men in the dugout to drown out. The analysis without context, often wrapped up as a viral-ready social clip.

The criticism of a player with zero clue over the tactical instructions they’ve been tasked with carrying out. The obsession with a Plan B whenever victory, often talked about as a right rather than something that needs to be constantly earned, is not secured.

But there is also the noise that is hard to silence, especially when it emanates from senior figures you’ve worked with and repeats like a scratched record.

For over a decade, from the moment he walked into a Mainz that had been shaped by Klopp, Tuchel has been juxtaposed with the man six years his senior.

The club with a lowly budget bordering the Rhine River has never been more successful than under his charge.

They participated in the Europa League twice. Only Bayern Munich, Dortmund, Schalke and Bayer Leverkusen bettered the points’ total amassed during Tuchel’s tenure.

Yet it is the days under ‘Kloppo’ Mainz most pine for, even though it included painful chapters. There was the agony of missing out on promotion to the Bundesliga by a point and by a goal before they finally reached the promised land, only to suffer relegation in 2007.

Even after the drop, Christian Heidel, the club’s technical director, would enthuse about Klopp “electrifying a city.” He had a unique ability to transform sad moments into defiance to go again and go harder.

“The crowd started celebrating relegation like we’d won the championship after he said: ‘We’ll be back, no question!.’”

Tuchel, meanwhile, is remembered for being an exceptional trainer but “the biggest headache every day” as one long-standing Mainz employee put it.

“Tuchel was the best coach I have seen in sessions and planning for opponents, but Kloppo was the best man. He could mix his tactical brain with a human touch. To replace a coach is easy, to replace a great person is very difficult. Dortmund will agree.”

Around 30,000 people gathered at Gutenbergplatz for Klopp’s Mainz farewell and the testimony is that all were reduced to tears. When Tuchel departed Mainz and landed at Dortmund after a sabbatical there was a gigantic contrast. This despite Klopp motioning for him to be his successor.

Instead of mourning at Mainz, there was a word of caution for his new employers. This was later revealed by a BVB source in Süddeutsche Zeitung following Tuchel’s sacking at the Westfalenstadion.

“We were warned by Mainz that it would likely become difficult. We didn’t listen. For a year-and-a-half everything was great. Then everything was just as Mainz said it would be.”

At Dortmund, Tuchel fell out with the club’s chief scout at the time, Sven Mislintat and banned him from the training ground.

It is reported he sent an unflattering text about sporting director Michael Zorc, intended for his agent Oliver Meinking, to the subject matter himself.

There was a complete breakdown in the relationship with chief executive Hans-Joachim Watzke and an overriding feeling that Tuchel saw the club solely through what it could do for his career. He never truly emotionally engaged with the people and they never truly took to him.

Well before the end of his time at the club, there was an annoying reminder of the hold Klopp still had on the place when Liverpool were pitted against BVB in the 2016 Europa League quarter-finals.

Several Dortmund players were still referring to him as their coach and not just privately but in interviews too.

Former BVB goalkeeper Roman Weidenfeller explained why such instances were the case in an unauthorised biography of Tuchel, written by Daniel Meuren and Tobias Schachter, released in Germany last April.

“In a sporting sense, he is untouchable,” Weidenfeller said. “His training sessions were outstanding, he was a visionary. But on a human level, it didn’t work in some areas.”

That storyline reemerged a year ago. As Tuchel prepared for a return to Signal Iduna Park with Paris Saint-Germain to contest a Champions League last-16 tie, Watzke was asked whether it would be an emotional affair.

He tersely remarked: “It’s not Jurgen Klopp coming back.” That kind of noise that is hard to silence.

When Tuchel arrives at Anfield for the first time as Chelsea manager on Thursday, it will not dominate his thoughts that his career has largely been viewed through and shadowed by Klopp’s.

He will be obsessed with the objective of further enhancing his team’s chances of taking a Champions League spot, while hurting a debilitated Liverpool’s ambitions in that regard.

Chelsea, with their defensive solidity under Tuchel and quality of squad depth, are perfectly positioned to push on and end the campaign as Manchester City’s closest competitors.

Only Pep Guardiola’s men have picked up more top-flight points since the new man’s first game at the helm.

There is no doubt, though, that should victory be secured on Merseyside, there will be an overflow of satisfaction on a personal level for Tuchel.

There is evidence from those that have worked with him that he bristles at comparisons with Klopp.

“I was saying that we, as a club, had to be a bit more engaging with our public,” Heidel recalled from a talk with Tuchel in the biography the manager has slammed.

“Then a phrase slipped out and I said: ‘When Kloppo was here…’ At that, Thomas let rip and shouted at me. What was I thinking? The conversation was over in that moment. And I thought, ‘Oops! I’ve obviously hit on a sore point’. He was really upset. That’s where the rivalry with Klopp stems from.”

In choosing to work in the Premier League, being contrasted against the division’s reigning champion will continue.

Blessed with a supremely talented and deep squad at Chelsea, however, Tuchel has the tools to carve a fresh path, away from Klopp’s shade – something that still wasn’t possible in Paris.

Triumph on Thursday would be a big step towards that, especially if Chelsea go on to secure a strong finish and Liverpool fail to hold their seat at Europe’s top table.