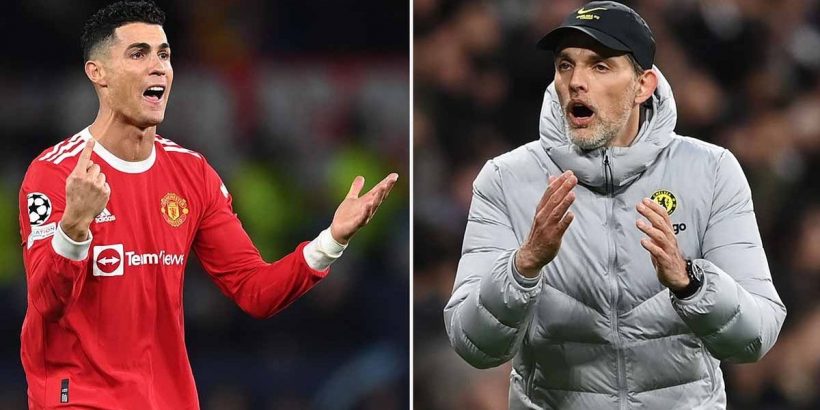 Cristiano Ronaldo would solve all of Chelsea's issues in attack according to Paul Merson, who has urged Thomas Tuchel to sign him before the end of the transfer window.

The 37-year-old has made it clear that he wants to leave Manchester United, and their disastrous start to the season could increase his chances of a speedy exit before the summer window shuts in two weeks time. Ronaldo has looked isolated in attack in Erik ten Hag's system, and Chelsea are lacking a clear no.9.

Chelsea were rumoured to be interested in Ronaldo earlier in the window, with new co-owner Todd Boehly keen to make a statement signing. Interest has since died down, but Merson thinks Ronaldo is the missing link for Tuchel.

It's been a good start to the season for Chelsea, as they have picked up four points from a possible six, and they were denied a perfect record after Harry Kane scored a last-minute equaliser on Sunday. The Blues have scored three goals across the two games, but they are lacking a presence in the penalty area.

New signing Raheem Sterling has looked sharp, and Kai Havertz continues to do his best in attack, but in the absence of Romelu Lukaku they have lacked physicality. Merson believes that Ronaldo is the answer, and has used Chelsea's 2-2 draw with Tottenham as the perfect case study.

Merson wrote in his column for Sky Sports: "Chelsea were outstanding against Tottenham on Sunday, they dominated the match from start to finish, but they haven't got a goalscorer or centre-forward and that cost them three points. Despite their domination, Spurs goalkeeper Hugo Lloris made just one save. That tells you all you need to know.

Should Chelsea sign Cristiano Ronaldo – and would he fit? Let us know in the comments section below.

"I cannot believe they didn't or haven't gone in for Cristiano Ronaldo. He just ticks all of the boxes Chelsea are lacking. Playing for Chelsea is not like playing for Manchester United, who are working from the halfway line.

"Chelsea are on the edge of the box, dominating games. Chelsea have unbelievable wing-backs, they dominate football matches, if they were putting the ball into the box for Ronaldo I would dread to think how many goals he could score."

There is still two weeks remaining in the summer transfer window, and a move to Chelsea would work for Ronaldo, who is desperate to further his legacy in the Champions League. United will struggle to let him join a Premier League rival though, and Tuchel has hinted about his concerns taking on another large ego.