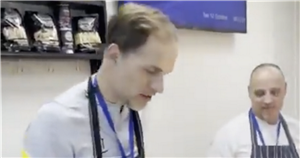 Thomas Tuchel took a moment away from his coaching duties at Chelsea to try his hand at a new profession – having previously admitted that no manager is ever safe at Stamford Bridge.

The former Borussia Dortmund and PSG boss helped the Blues to Champions League glory during his first season at the club, despite having mixed feelings over the dismissal of Frank Lampard.

The Blues have had a fine start to the Premier League season, despite losing to Manchester City, and sit a point clear at the top as the international break draws to a close.

With Tuchel having some spare time as the majority of his players travel across the world, he was spotted donning an apron while helping out the kitchen staff at Cobham.

In the seven second video, Tuchel handed over a plate which included a pretzel and two bratwurst sausages, which is a traditional German breakfast.

The member of kitchen staff then said: "Not bad, very good."

While the footage has again showcased the more light-hearted side of the boss, he has hinted in the past that no one is safe as Chelsea manager because of their desire to win major silverware.

Should Chelsea sack Tuchel if they don't win a major trophy this season? Tell us in the comments section

Having said that, Tuchel has been involved in football since he was aged just six in 1978, becoming a coach in 2007 before being appointed by Bundesliga outfit Mainz 05 in 2009.

He said of his status at Chelsea earlier this year when asked if he was worried over future pressure on his job: “Yes and no, at this level I am grateful to work at this level.

"If you sign for Chelsea, you sign for the hunger of titles. To be absolutely competitive. I'm aware of that.

"It's like you said, it doesn't scare me, we have big ambitions, I'm excited by the mixture of the team. The structure of the club. The first days were amazing.

“I'm absolutely aware at some point everybody expects results, but I'm doing that of myself all the time.”

Next up for Chelsea is a trip across west London to take on Brentford, with fans left unhappy after learning which referee will be taking charge of the encounter.