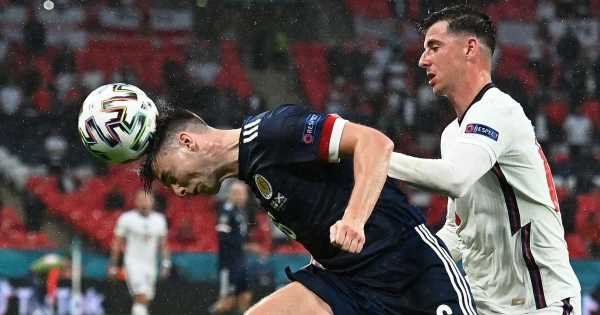 Kieran Tierney is understood to have agreed a new contract – with Mikel Arteta viewing him as one of Arsenal's most influential players.

Tierney was one of the Gunners' standout players last season during what was otherwise a largely disappointing campaign.

The 24-year-old was also one of Scotland's best performers as they frustrated England in a goalless Euro 2020 draw at Wembley on Friday night.

Arsenal have been talks with the left-back over a new five-year deal – and have now reached an agreement, according to Football London.

The report claims Tierney will sign the new contract in the coming days, having impressed since joining from Celtic for £25million two years ago.

He is now seen as one of the Gunners' most important players, according to The Telegraph – as indicated by the length of the new deal at a time when Arteta is preparing to overhaul his squad.

Granit Xhaka is close to joining Roma, while Matteo Guendouzi has been linked with a move to Marseille, and Konstantinos Mavropanos looks set to join Stuttgart.

Arsenal are hoping to convince Emile Smith Rowe to sign a new contract, after rejecting a £25m bid from Aston Villa for the playmaker.

Will Arsenal improve under Arteta next season? Have your say in the comments below

Smith Rowe is seen as a big part of the rebuild at the Emirates, along with the likes of Bukayo Saka and Tierney – who has been linked with interest from Manchester City and has previously been tipped by his manager as a future club captain.

“I think he can be Arsenal captain as he has the respect and admiration of every member of the staff and every player,” Arteta said of the Scotland defender.

“It is just the way he is. He does it in a natural way. He is a really shy boy as well but he represents all of us in the club; all of the values that we want to instil and are in the DNA in this club.”